DUE TO THE ADVERSE WEATHER, THE SHOW INSERTED IN THE FESTIVAL OF THE VESUVIAN VILLAS “DEAR PIER PAOLO” AND PROGRAMMED ON 25 SEPTEMBER AT 9.00 PM IN THE VILLA DELLE GINESTRE IN TORRE DEL GRECO, WILL BE STAGE IN THE HALL OF THE HOLIDAYS OF THE VILLA CAMPOLIETO IN ERCOLANO, ALWAYS ON 25 SEPTEMBER BUT AT 7.00 PM 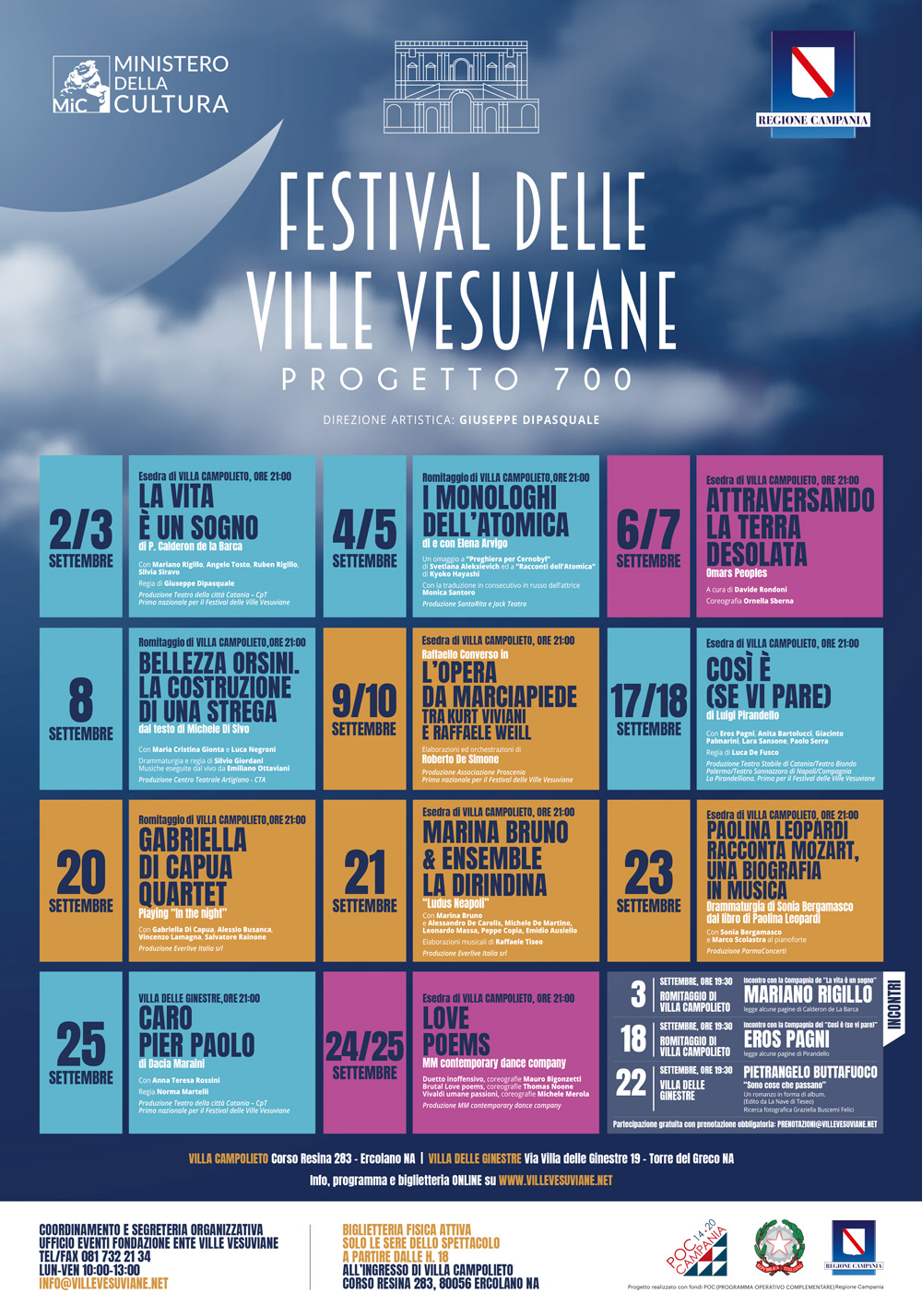 Theater, dance, music: the Vesuvian Villas Festival is back and will be scheduled from 2 to 25 September in the splendid 18th century Vesuvian Villas.
The Festival, now in its thirty-third edition, was born from the Ente Ville Vesuviane Foundation, chaired by Gianluca Del Mastro, with the contribution of the Campania Region and the Ministry of Culture. Artistic director: Giuseppe Dipasquale, Italian director and playwright and former artistic director of the Must Musco Theater of Catania and of the Teatro Stabile of Catania and currently Artistic Director of the Bluebeard, Morgantina.
Also this year the theme will be “Progetto Settecento”, a format restored by the artistic director of the last edition, Luca De Fusco, who has taken up a common thread that has characterized the Festival since the mid-1980s, to enhance the architectural heritage of the villas of the Golden Mile.
There will be four national premieres that will debut during the festival: “Life is a dream” by Pedro Calderon de la Barca, with Mariano Rigillo directed by Giuseppe Dipasquale; Raffaello Converso in “The Sidewalk Opera between Kurt Viviani and Raffaele Weill” with elaborations and orchestrations by Roberto De Simone; “So it is (if you like)” by Luigi Pirandello with Eros Pagni and directed by Luca De Fusco; “Caro Pier Paolo” by Dacia Maraini with Anna Teresa Rossini.

Notes from the artistic direction:

“This year’s theme of the Festival, which is grafted on the groove left by its founder Luca De Fusco, can be summed up in the syntagm of the dream of diversity. Making theater means giving the viewer a vision. A vision of the world, a vision of life, a vision of reality, or, in one, a vision of Nature. Because the art of theater, if it is art, is desperately human. It travels through the actor’s body and voice, which are instruments of the soul. The soul is the sponge of discomfort, like the well of joy and pain. Our task is at the service of men. We are committed, as we were, to say it with Lear, the spies of God, to show others how one can rejoice and go mad with pain at a given moment, on a given occasion, but also how deception, the fruit of conscience applied to a perverse action can generate reason and light to awaken human monstrosities from the dark sleep.
Contemporary and living men, the actors, are forced to take on the role of characters imagined or even written in a different era. What can be told about them? How can an 18th century man be narrated in the theater through the contemporary gesture of an actor? And what do we imitate with the theater? Such a reality as a model of life or its action? Of an era to be represented, is it enough to inspire ourselves and imitate the figurative art of the period in question to have a credible result, or to seek in the contemporary also an eternal process that is replicated from century to century? Hamlet’s affirmation that art is the mirror of nature has some truth. However, I believe that the mirror does not reflect, or does not assume in itself the slavish image of the reality it faces, since it is an instrument that cannot be cataloged at all within the so-called exact sciences. The theater cannot bring about a perfect reproduction of reality, on the contrary, if anything, it distances itself from the reality that it wants to be looked at, in a certain sense distorting it. The theater sets in motion a process that is in contradiction with real action to enhance its unavoidable impregnability. The society towards which theatrical action is aimed today is a society that can be defined as non-affective, and we are part of it. To do this today it is necessary to assume a paradox as a transversal action of theatrical use: to arouse attention on life through the instrumental use of dreams, of vision. The boundary between life and theater is as blurred as the boundary between dream and reality. Where one enters the other in a continuous interpretative transfer. Life enters the dream to symbolically reformulate itself into images that serve life. This is why it risks being improper to consider theater today only as a mirror of nature if it is not understood as a magical building capable of building dreams. In this sense, the choice of authors and musical and contemporary dance artists such as Calderon de La Barca, and Pirandello, Maraini, Pasolini, Buttafuoco, De Simone, Di Sivo, Di Capua, Noone, Bigonzetti, Merola will help us to tell the sense of a contemporary that questions the dream and the vision. Since despite everything it seems on the dream scene, indeed, precisely for this reason, only consistent human responsibility in the actions of life can give a meaning that is not ephemeral to existence. “
Giuseppe Dipasquale

“Also this year the Management Board of the Ente Ville Vesuviane Foundation wanted to focus on the eighteenth century project, an ambitious idea that brings top-level shows to our villas for an ever wider and more varied audience. We are happy that the Ministry of Culture and the Campania Region wanted to support this initiative that goes in the direction of a modern and rational vision of the use of our wonderful spaces.
Shows for all, of high cultural value, in the wonderful setting of the eighteenth-century structures of the Golden Mile. “
Gianluca Del Mastro
President of the Fondazione Ente Ville Vesuviane

“A festival of tradition and one of the longest-running in our region: the 33rd edition this year. A multidisciplinary Festival with performances of theater, dance, music of great quality and charm. It is the festival of the Vesuvian Villas – 18th century project: inspired by the century of Neapolitan enlightenment in which the Golden Mile was born. It is a means of telling the history of these places, reviving their essence and surprising the viewer by combining the charm of artistic performances with the poignant beauty of the Vesuvian Villas of the eighteenth century. “
Roberto Chianese
Director General of the Fondazione Ente Ville Vesuviane

The under 18 ticket is available at a price of € 5.00, which can only be purchased at the physical ticket offices – with a presale of € 2.00 – or directly on the evening of the event.

Meetings with the companies and book presentation: Free admission

Presales available and purchasable on the GO2 circuit
Buy your tickets