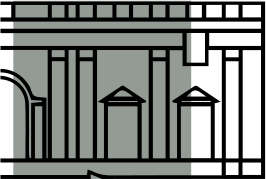 Along that stretch of the royal road of Calabria, which due to the splendor of the buildings that opened on it, was renamed the Golden Mile, not far from the famous Villa Campolieto, stands the Villa Petti Ruggiero. The positioning of this factory, on the slopes of Vesuvius in a hilly area rather far from the sea, makes it belong to a category of “rustic residences” villas on the coastal strip. It was built at the behest of Baron Petti towards the middle of the 18th century and belonged to this family until 1863, when it passed to the Ruggiero family. The current planimetric configuration of the villa does not correspond specifically to the original one, as can be seen from the map of the Duke of Noja, resulting in an asymmetrical development of the buildings with respect to the longitudinal axis. The villa the street a facade of modest size whose origins are today altered by the addition of a raised floor. In the composition of the façade, a beautiful portal, turned round, in piperno and white marble dominates with ashlar pilasters and Ionic capitals on the sides, surmounted by a mixtilinear balcony. The decoration of the façade consists of stucco tympanums that frame the openings of the mezzanine and the main floor.

The planimetric layout is one of the most usual: the deep body facing the road extends into two short wings which, connected by an exedra, determine the space of the elliptical courtyard. The vestibule placed in axis with the passage of the exedra, is articulated in the succession of three spaces covered by cross vaults that expand in the central part creating two exedras where the marble seats are placed that follow the trend of the curved side parts. The façade on the courtyard is certainly the peculiar part of the factory: articulated by a serliana, which supports a terrace, with a marked Rococo style. In fact, in the lower order it presents a score of smooth pilasters which is also repeated on the short side wings that frame the three openings of the portico opening onto the courtyard. On the façade of the upper floor, set back to give way to the terrace, there are balconies framed by cartouches and stucco scrolls and in the central part there is a niche that houses the bust of St. Gennaro in the consuming gesture of stopping the lava of the volcano. The terrace, whose balustrade alternates with pot-bellied railings hillocks in piperno supporting busts sculptures !, according to a recurring motif in Neapolitan eighteenth-century culture, constitutes the richest decorative episode of the whole complex, from which you can see the shady avenue of the garden closed at the bottom by a niche. 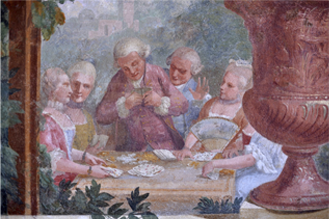 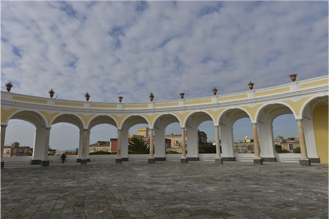 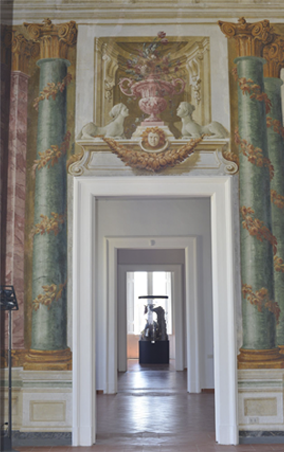 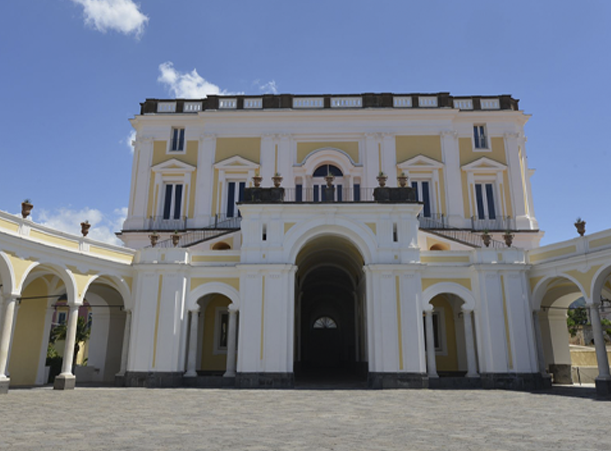