ORDINARY CLOSURES
The villa will be closed to the public on days
24th, 25th, 31st December, 1st January, 15th August

Villa Campolieto was built on the will of Prince Luzio De Sangro, Duke of Casacalenda who, in 1755, commited the project to Mario Gioffredo. The Villa stands out in one of the most evocative positions, downstream the Bourbon road of Calabrie, not far from the Royal Palace of Portici, from the archaeological excavations of Herculaneum and near to Villa Favorita. Around 1761, Gioffredo was forced to leave the building site due to legal disputes. He was replaced by Luigi Vanvitelli who directed the works from 1763 to 1773, then completed by his son Carlo, in 1775. In 1977 , the Vesuvian Villas Management, today a Foundation, acquired Villa Campolieto and restored it to its former glory. Nowadays, Villa Campolieto is one of the main stages of the so-called “Golden Mile”, the one-mile long stretch of road that extends between Herculaneum and Torre del Greco. The name comes from the gardens and eighteenth-century noble architectures that surround the path. The main building, with a square plan, has four blocks organized around a central Greek cross gallery and it is spread over five levels. The rear side opens towards the Gulf of Naples with an elliptical arcade with Tuscan columns that form a covered belvedere and ends with an elliptical staircase that connects the building to the garden below. The large stable designed by Gioffredo, with cross vaults and piperno pillars opens up on the side of the exedra. In his project, Vanvitelli created a continuous dialogue between the architecture and the surrounding natural environment. Vanvitelli overturned the original project of Gioffredo. He redesigned the staircase drawing from the model already tested in Caserta that presents a central buttress and two lateral ones. Vanvitelli also enriched the staircase with a mask and a grotesque located on the inner side of the arch at the entrance and he added six niches decorated with statues of mythological subjects meant to articulate the climb to the noble floor. The vestibule, then, has a domed covered atrium flanked by two apsidal niches. Its function was to welcome and direct guests to the different rooms of the apartment. From the room called “telescope” for its characteristic shape, you are accessed to the private rooms of the family, leading then to the dining room, one of the most impressive ambiance in the villa. Vanvitelli redesigned it in circular shape with the so-called incannucciata technique, that consists of a wooden rib, which supports a structure made of bamboo canes.

The fresco painted by Fischetti and Magrì that decorates the entire room, reproduces the supporting structure and depicts a gazebo covered with a vine placed in the prince’s grounds, where the family loved to laze with their guests on summer days. With our backs to the window, observing the fresco from right to left, we first meet a group of people playing cards including De Sangro, followed by the islands of the gulf in the background. After passing the door we can see one of the few self-portraits by Vanvitelli, scanning the sky with a monocle. The “Hall of Mirrors”, located in this wing of the building, is a feminine room, as the soft colors suggest. It was a place of entertainment and conversation before entering the party hall. Even if the construction of the Vesuvian villas of the XVIII century was conceived to favor the external use to the internal one, great importance was given to the Party Hall. What is left of the barrel ceiling fresco are mythological figures with festoons, cupids and supporting architectures. The frescoes on the walls reproduce the myth of Hercules with eight medallions depicting his life, two niches with the statues of Hercules and Cupid and in the lunettes above the doors are depicted Abundance and Wisdom. Going out to the terrace can be admired one of the most suggestive views of the Gulf of Naples, from Posillipo to Ischia, then Capri and the Sorrento Peninsula. On both sides, two rampant stairways branch off and lead to the uncovered path of the portico. Looking right you can glimpse four sentry boxes that used to border a fish pond and served as a shelter from the sun while fishing. The background shows the woods of the Royal Palace of Portici and the Herculaneum archaeological area. Looking out at the center of the promenade, we admire the architecture given by the elliptical staircase that leads to the fountain and the palm grove, which together with the hermitage and the quarry represent the most intimate part of this place. Continuing the walk and turning our backs to the sea, we admire the Vesuvius, dominating the landscape with its grandeur. On the same perspective there are Villa Ruggiero and, on the right, Villa Favorita. 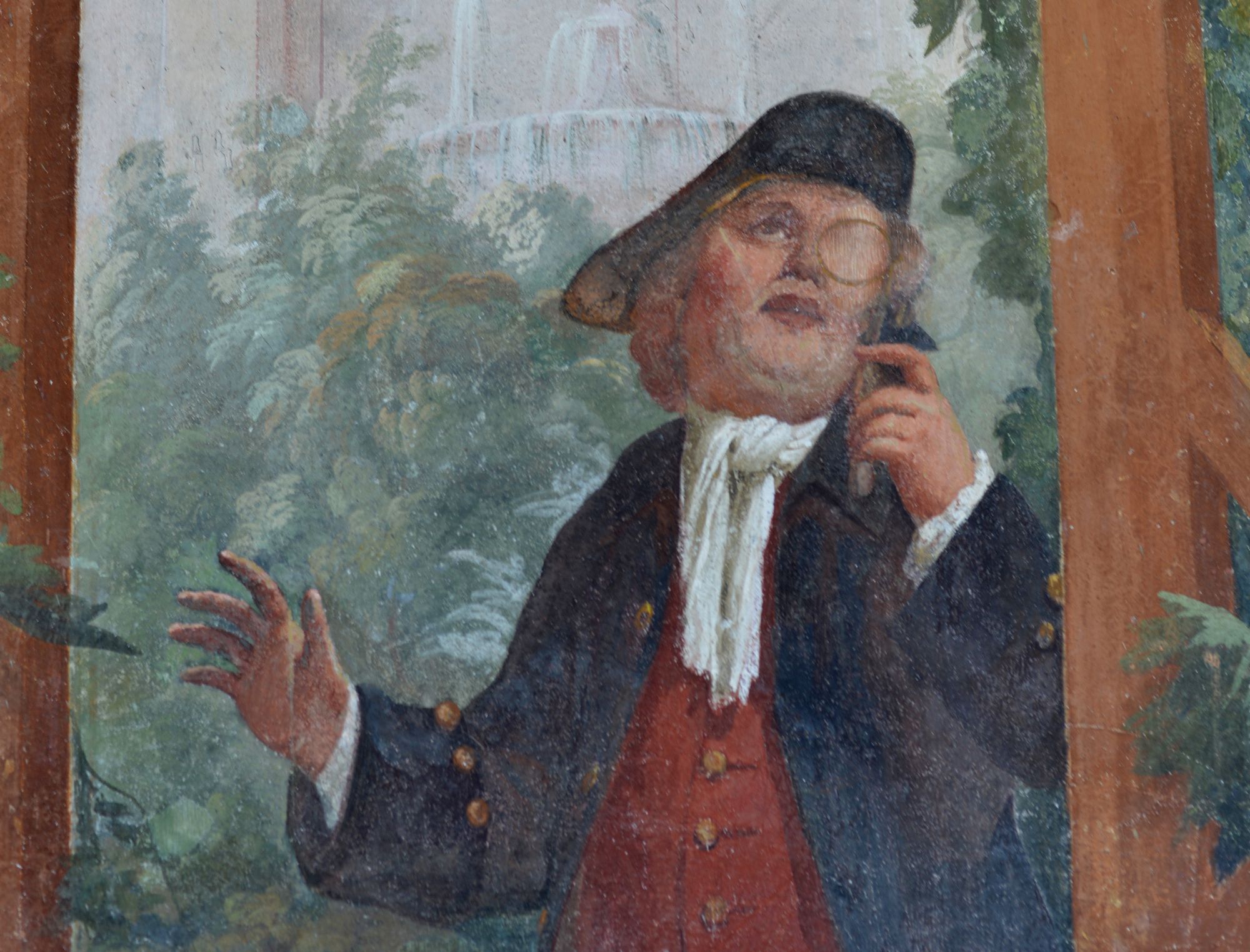 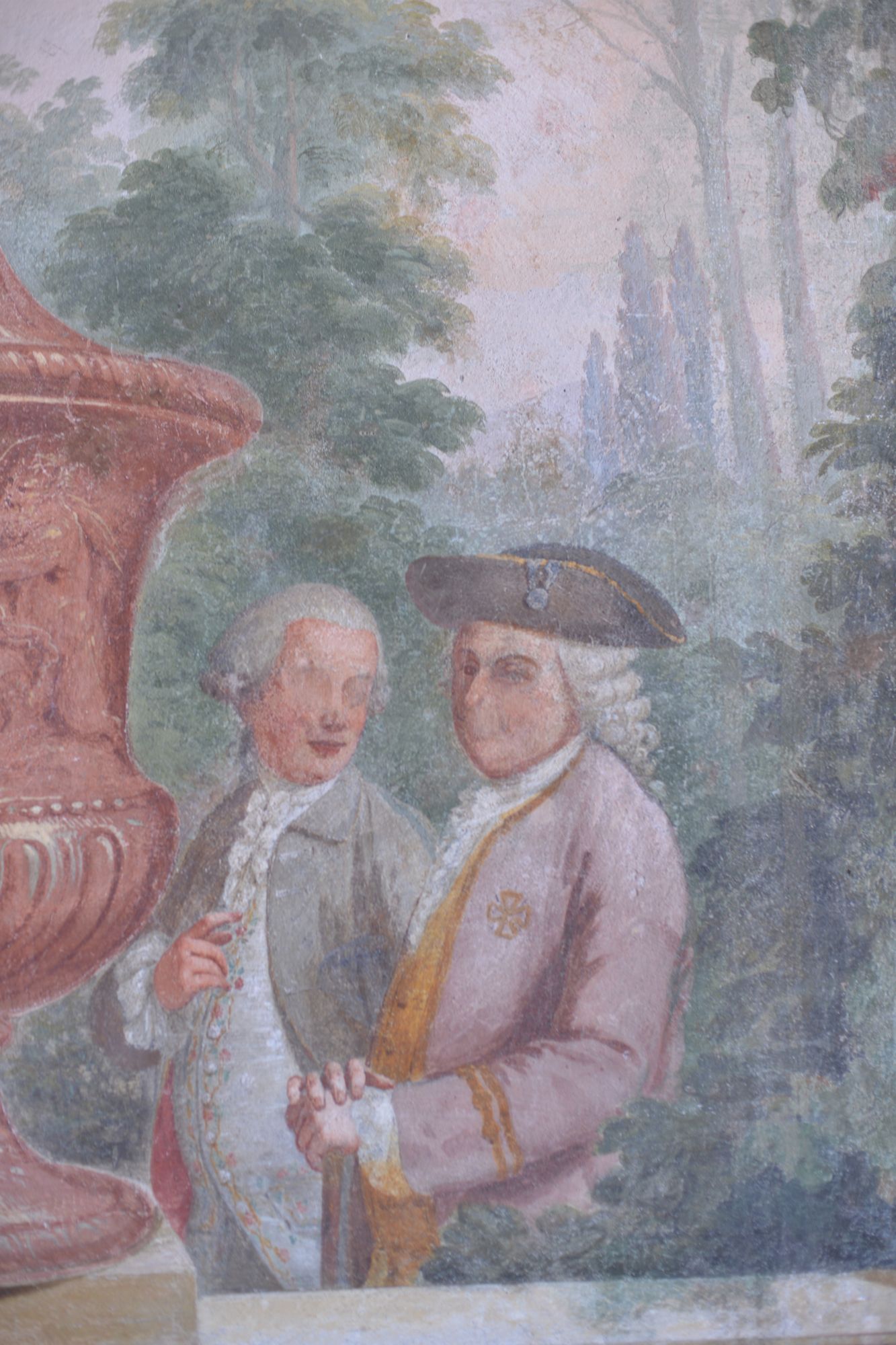 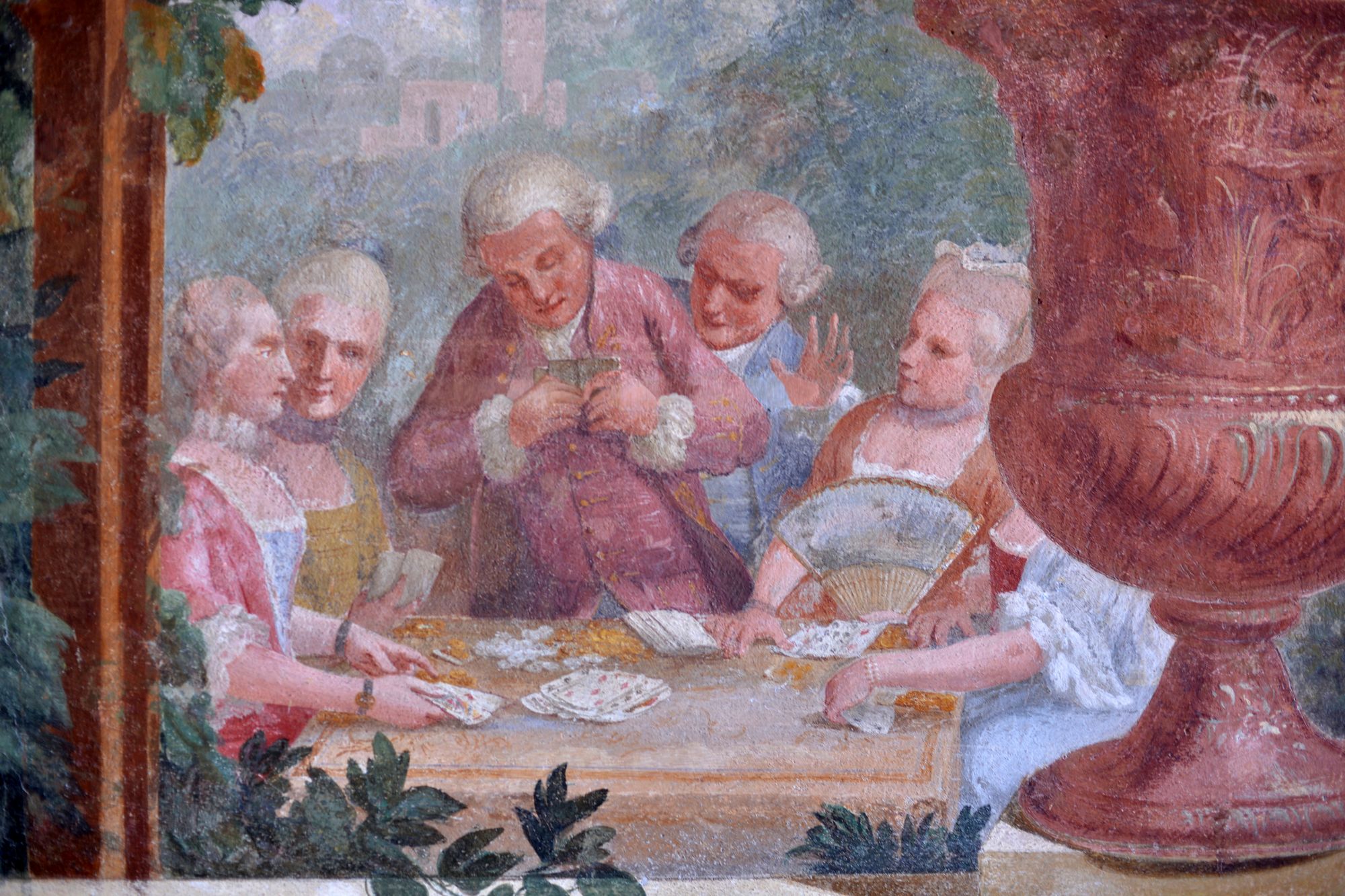 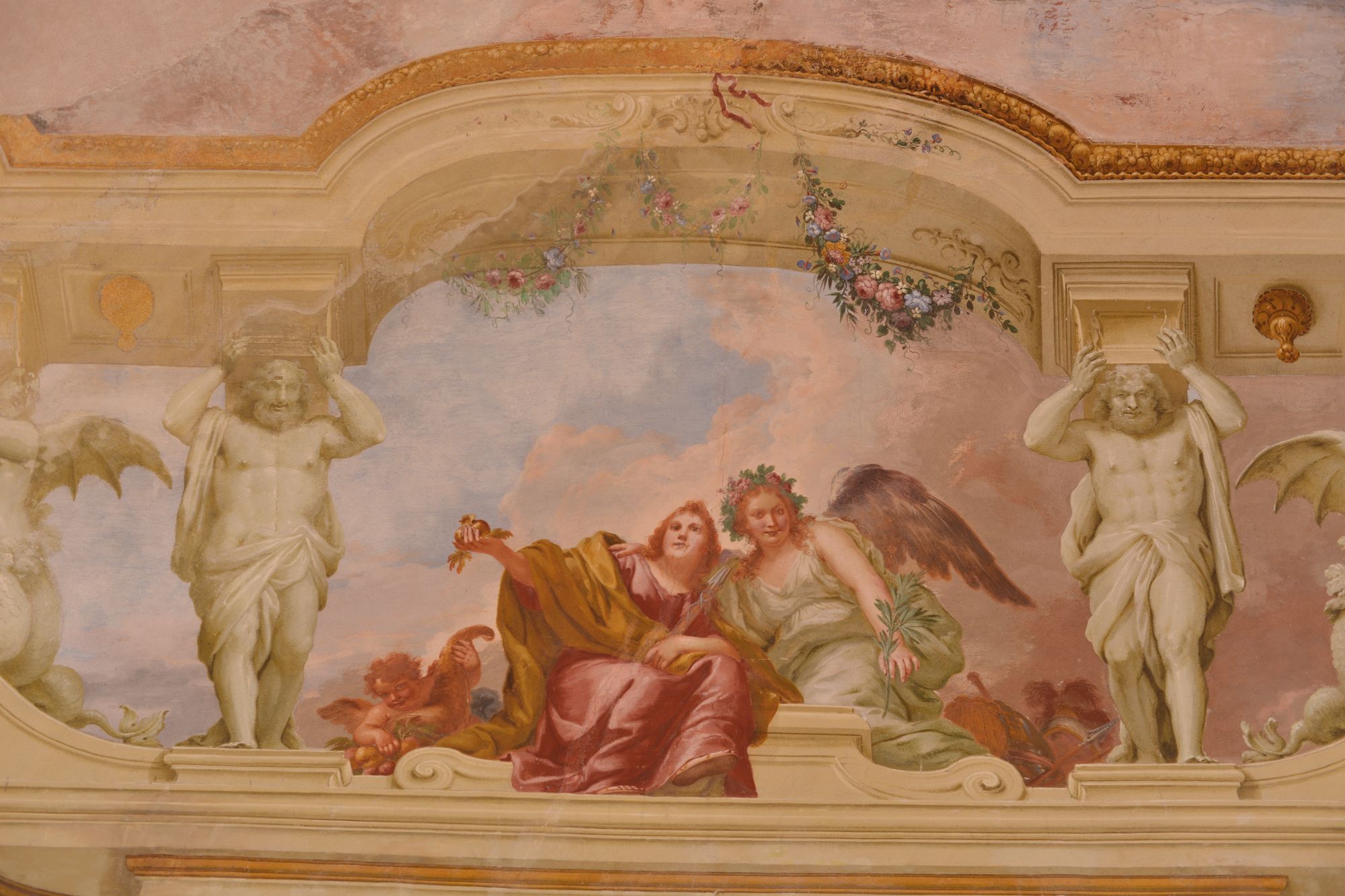 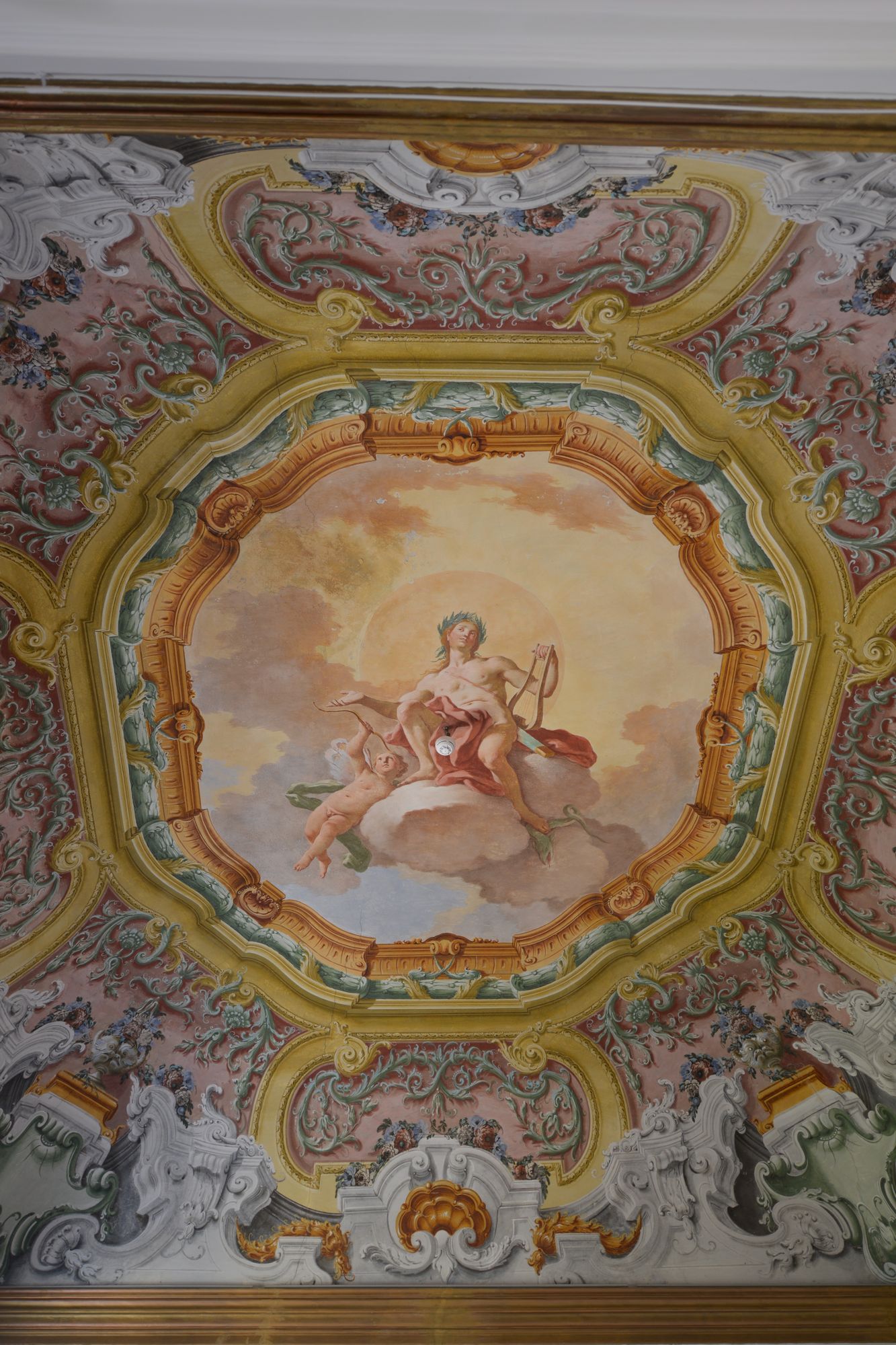 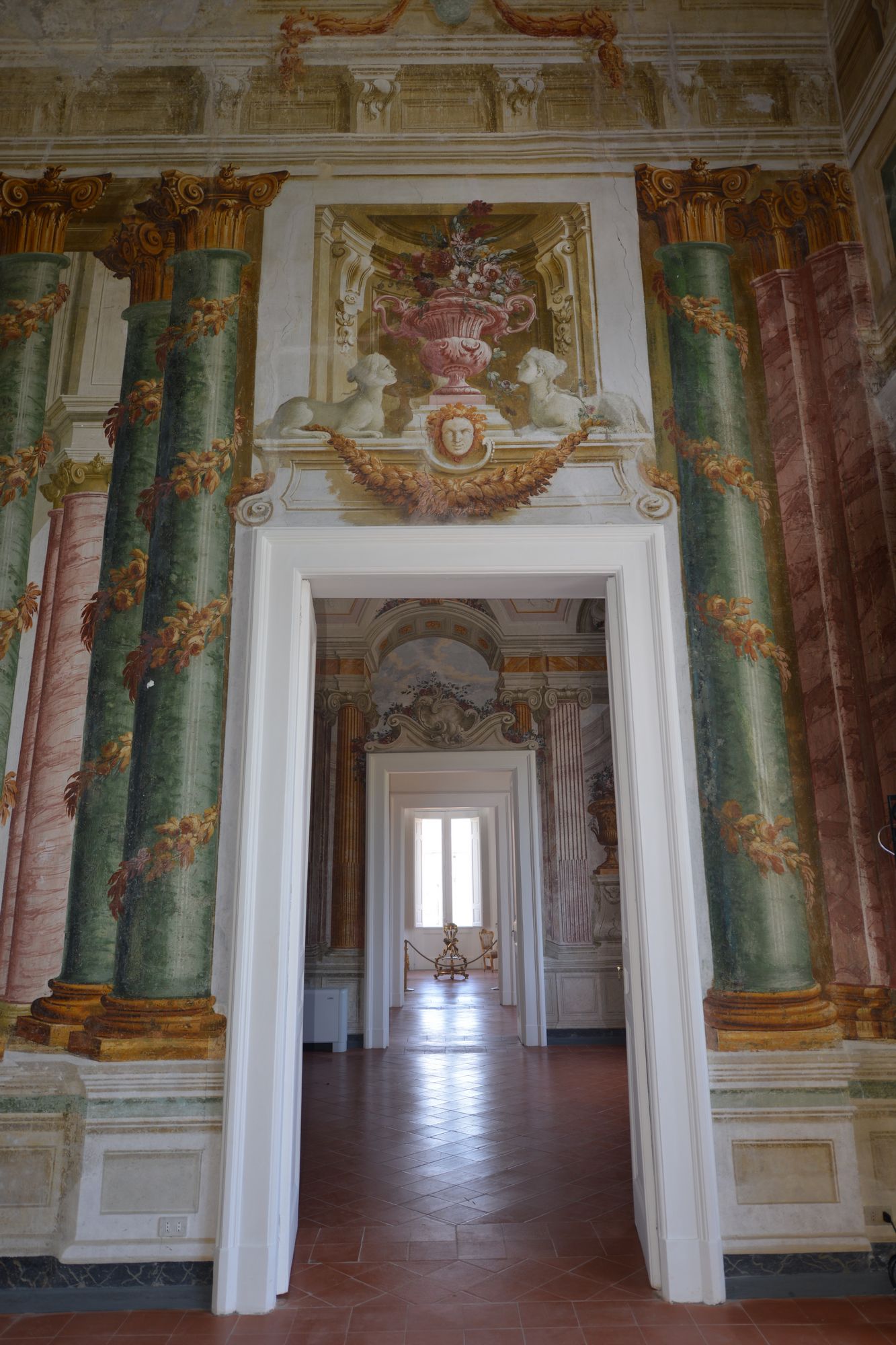 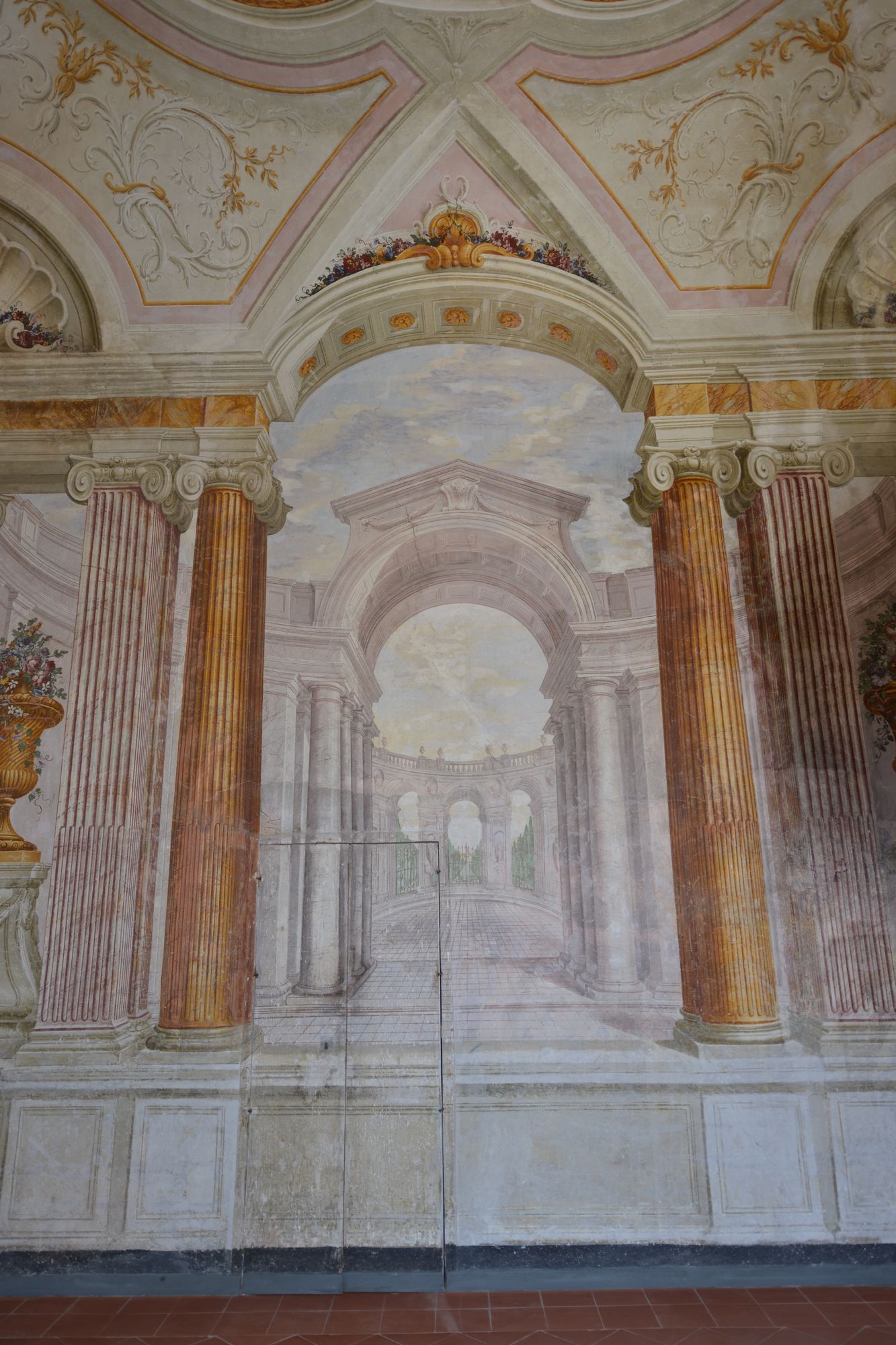 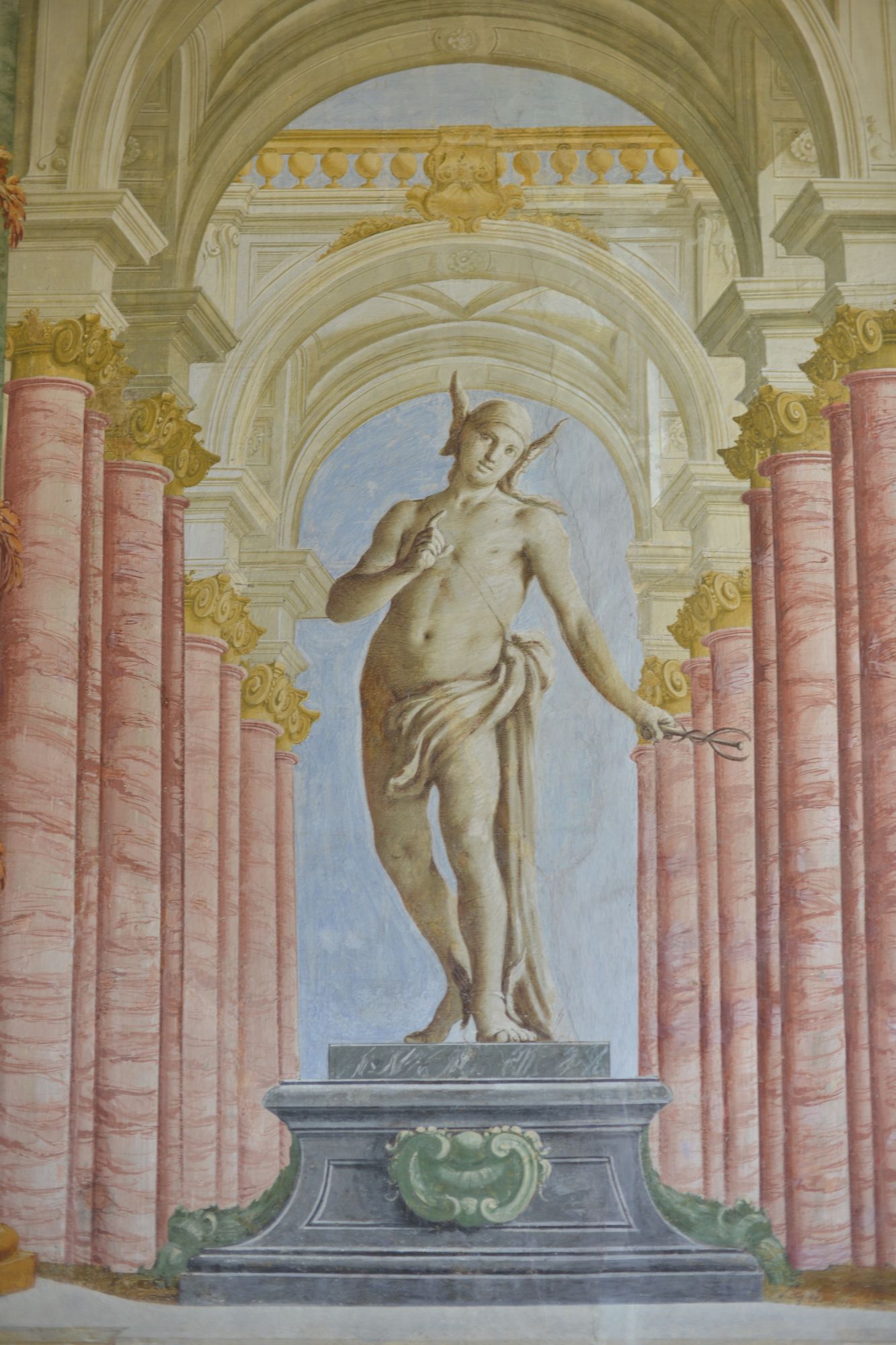 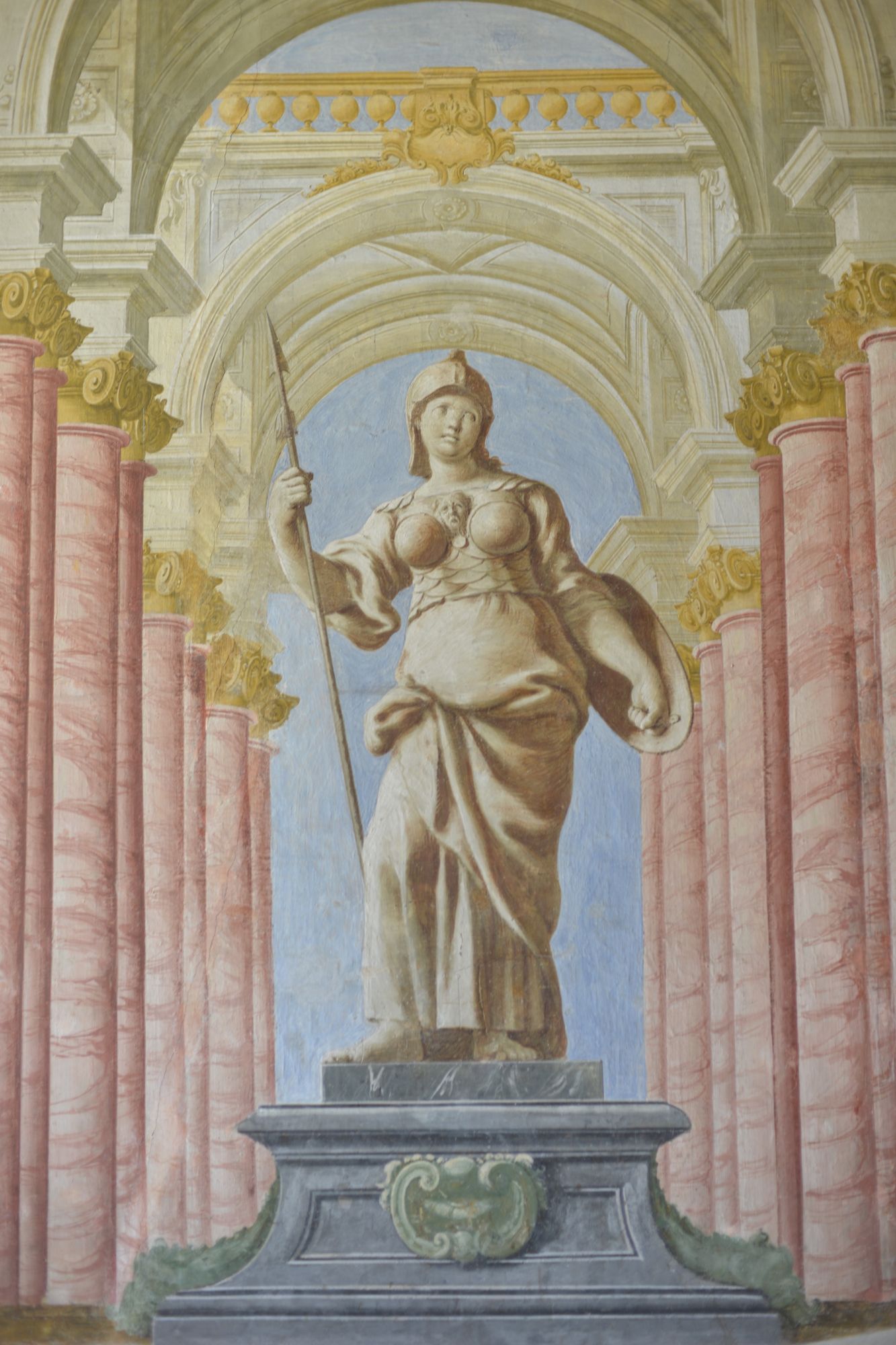 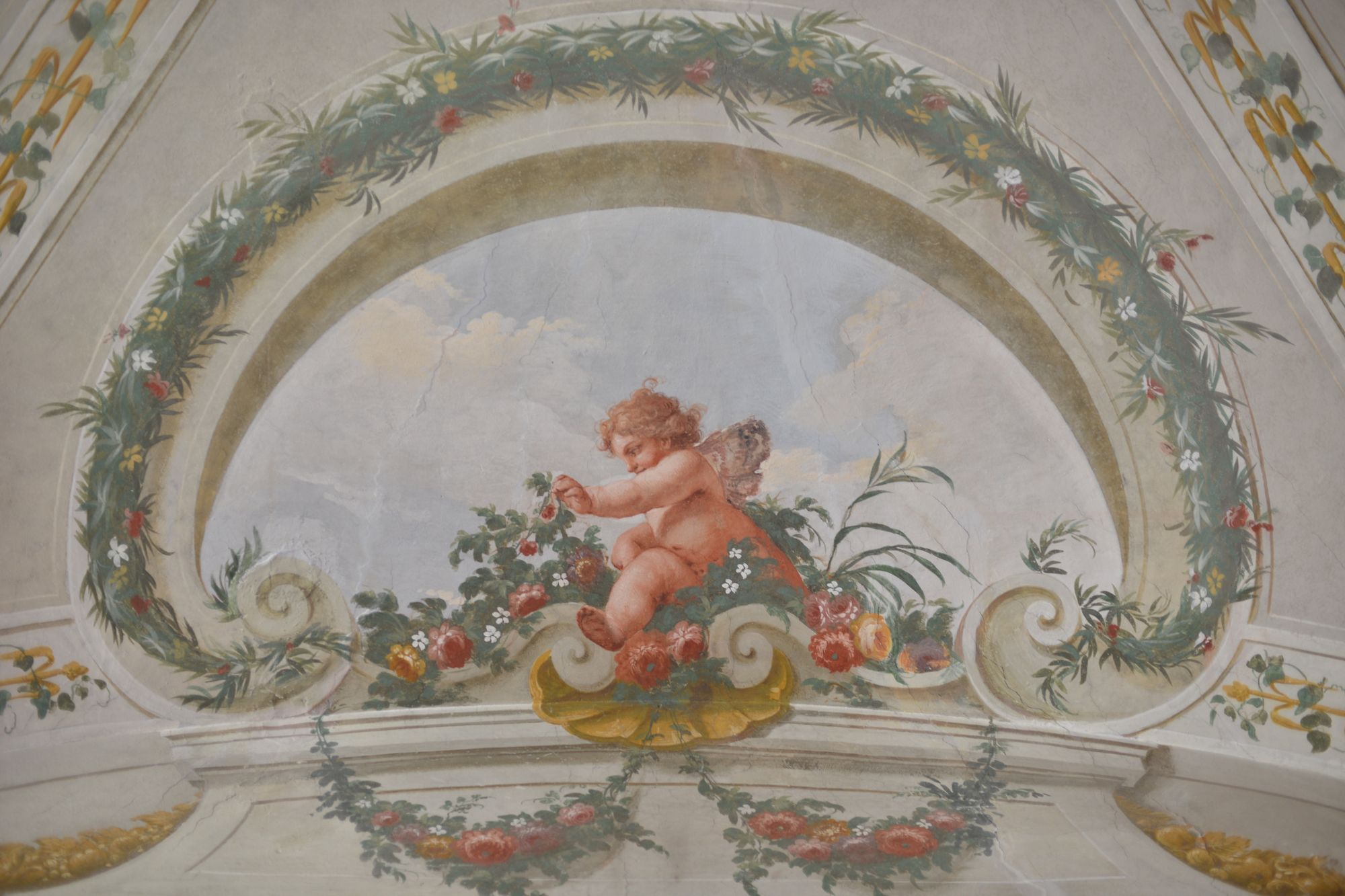 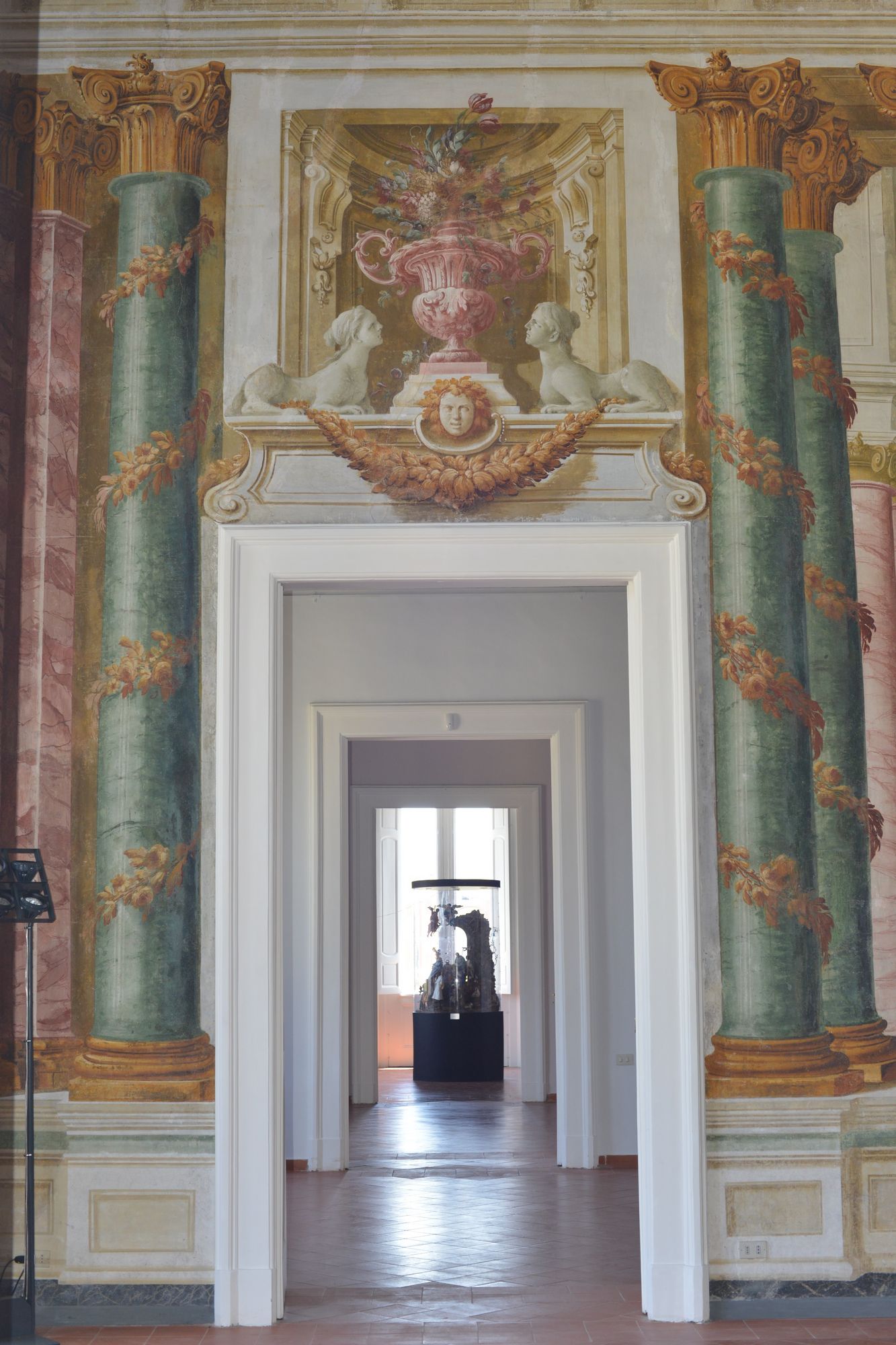 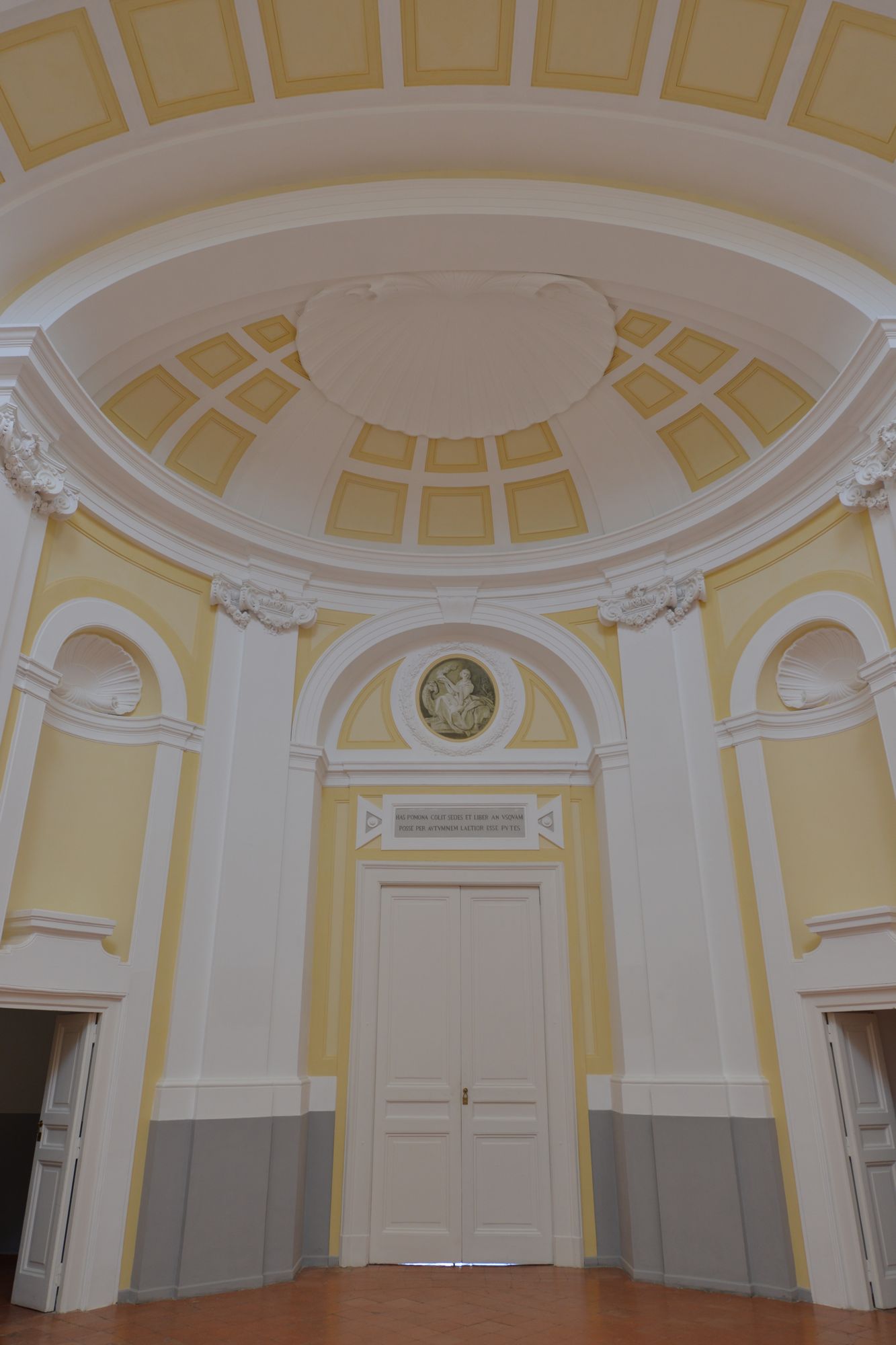 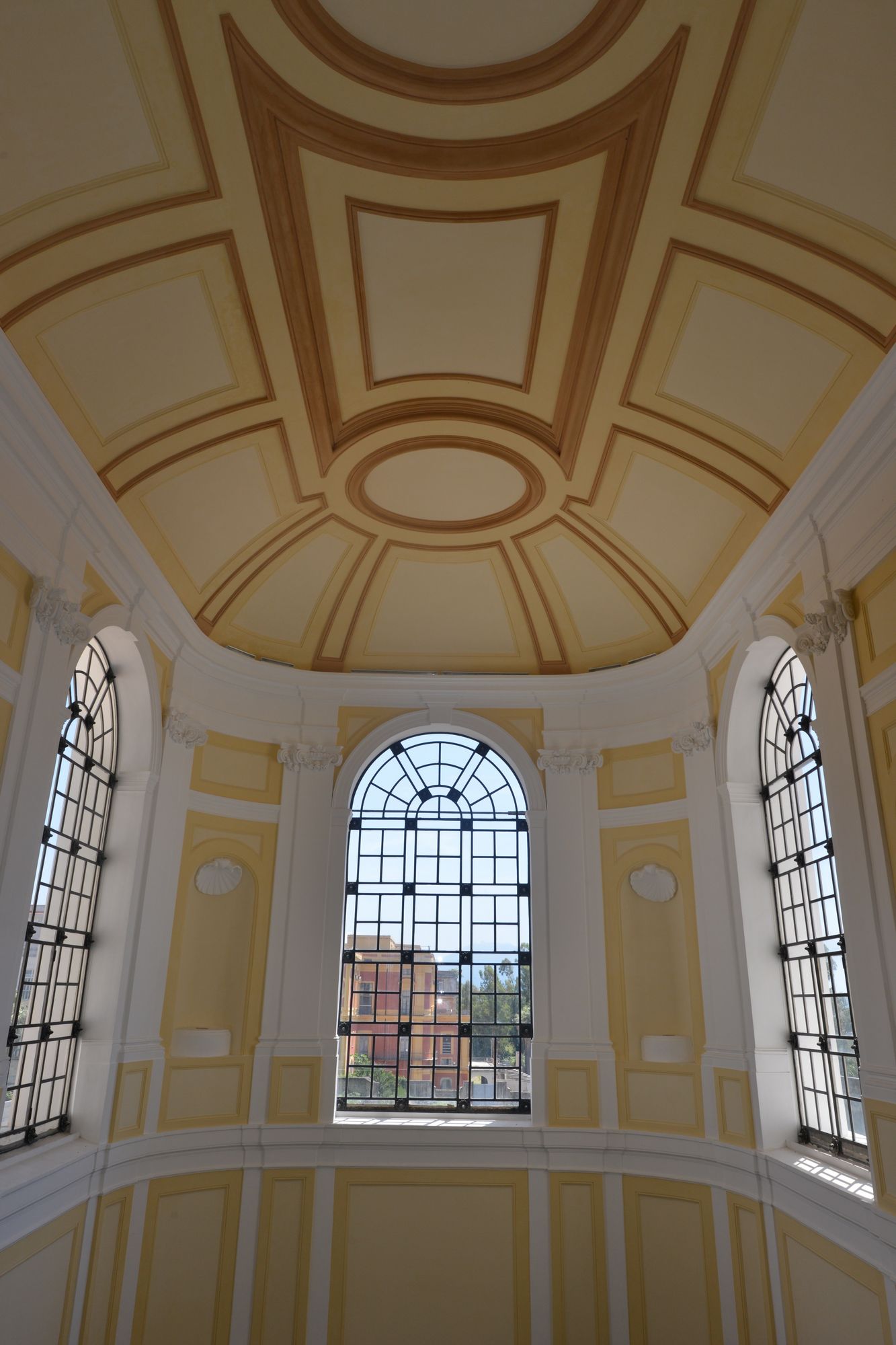 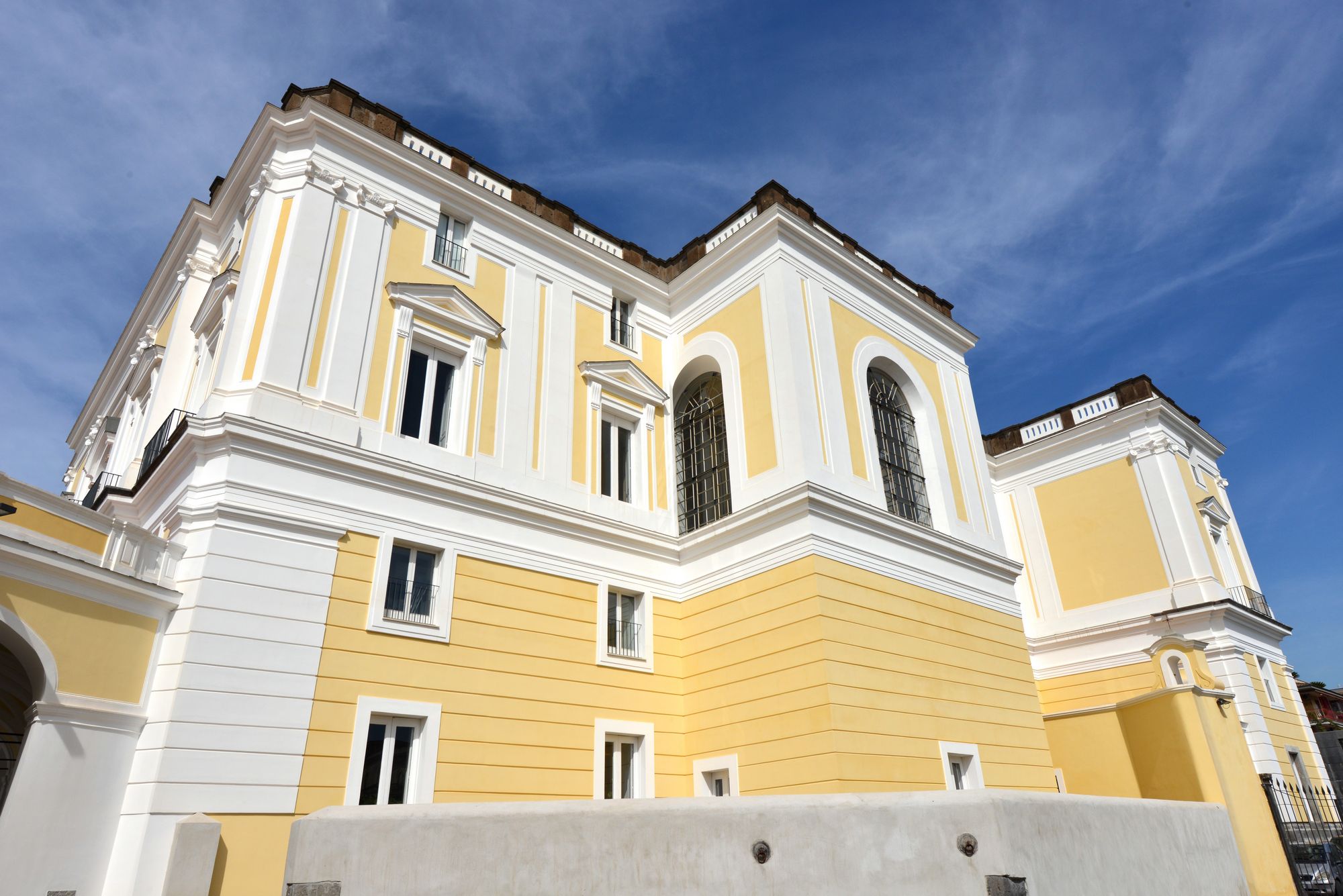 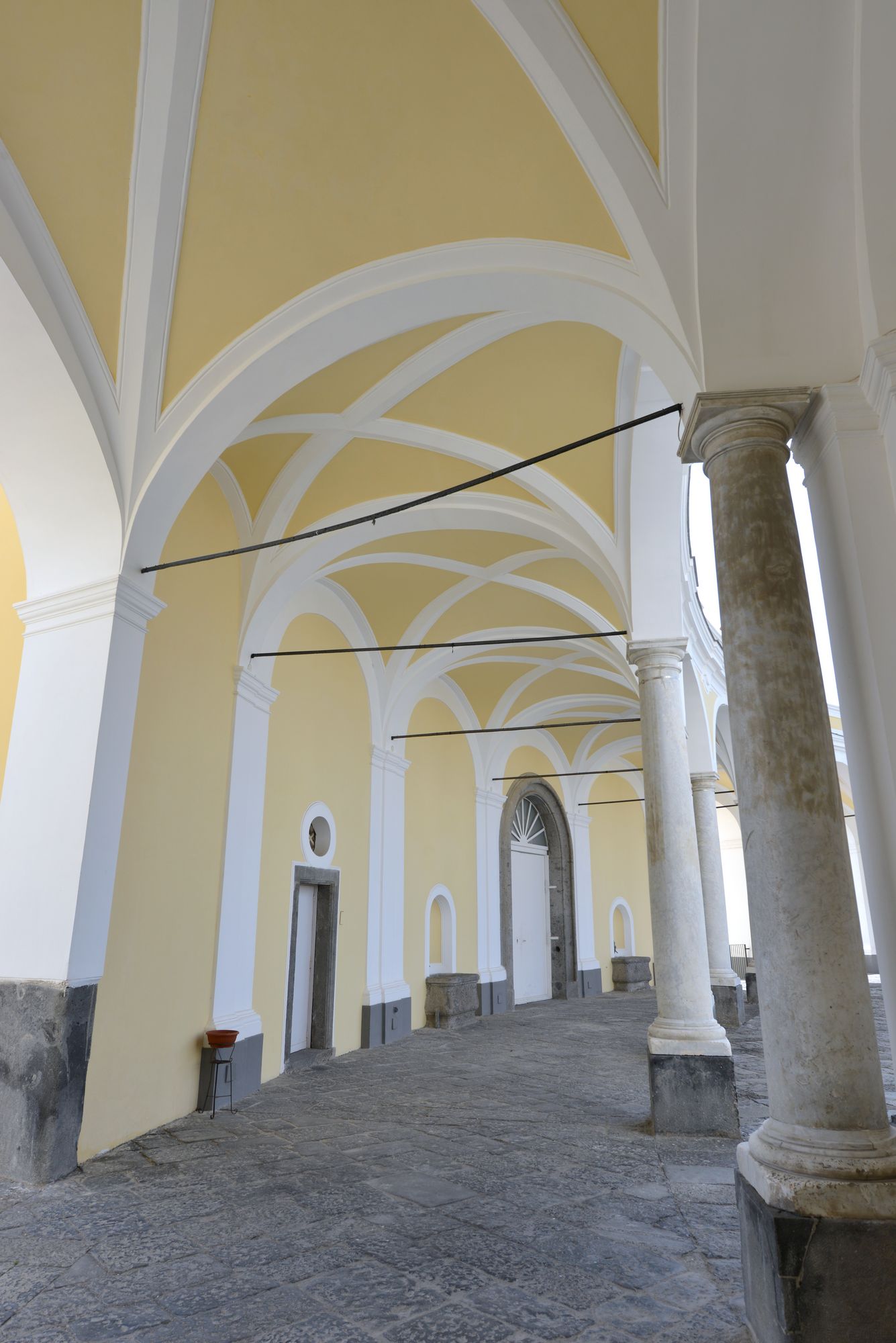 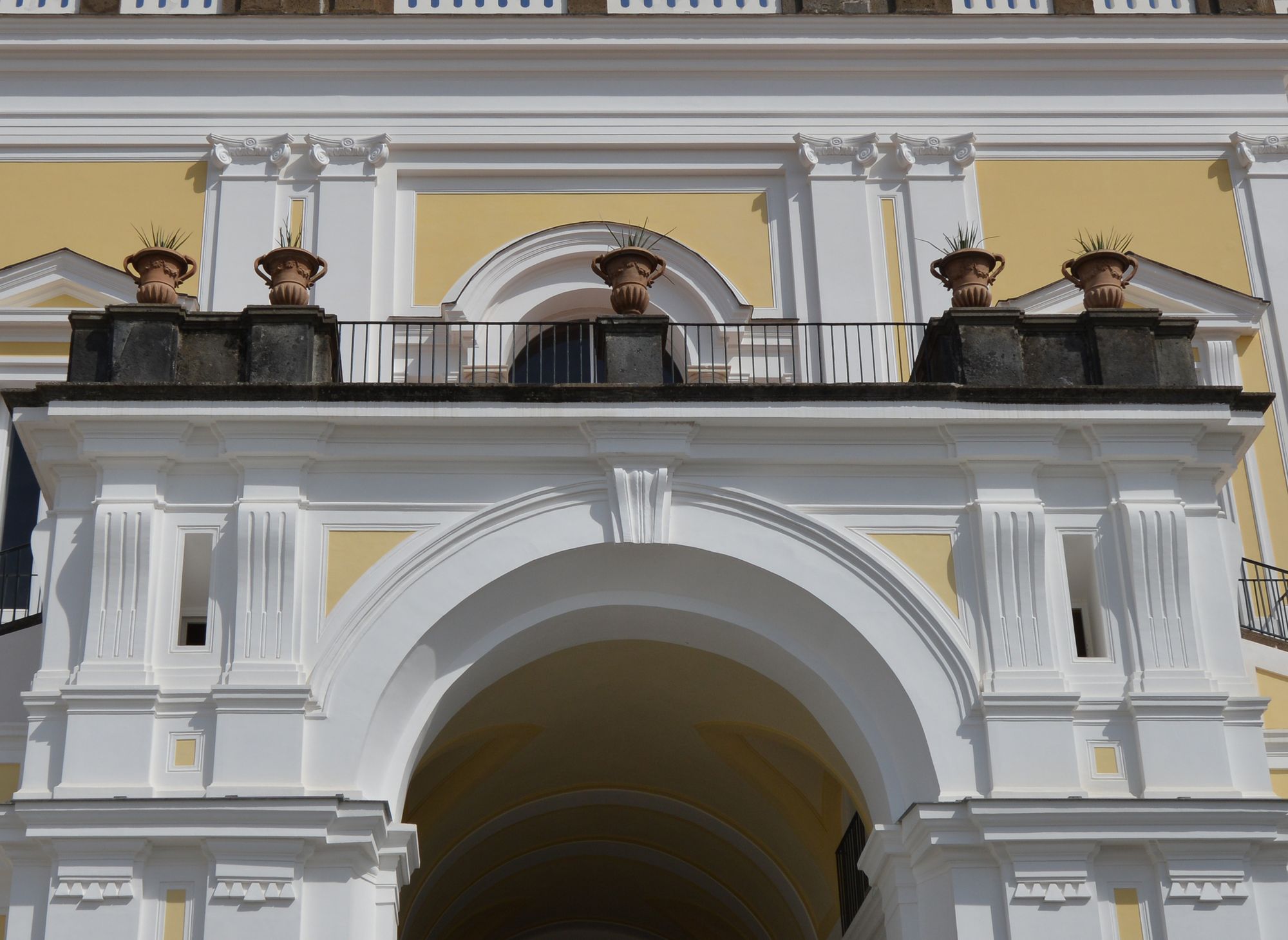 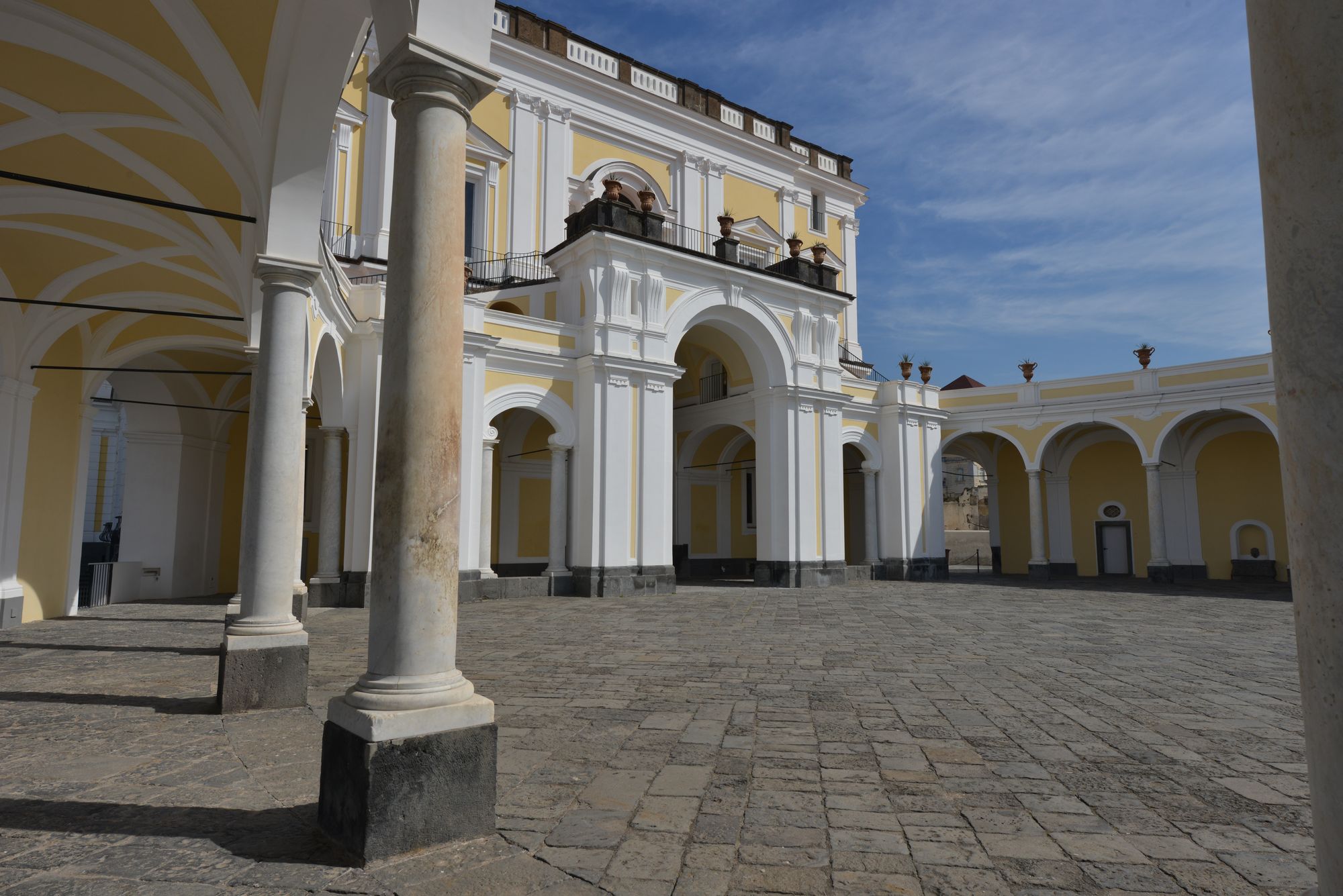 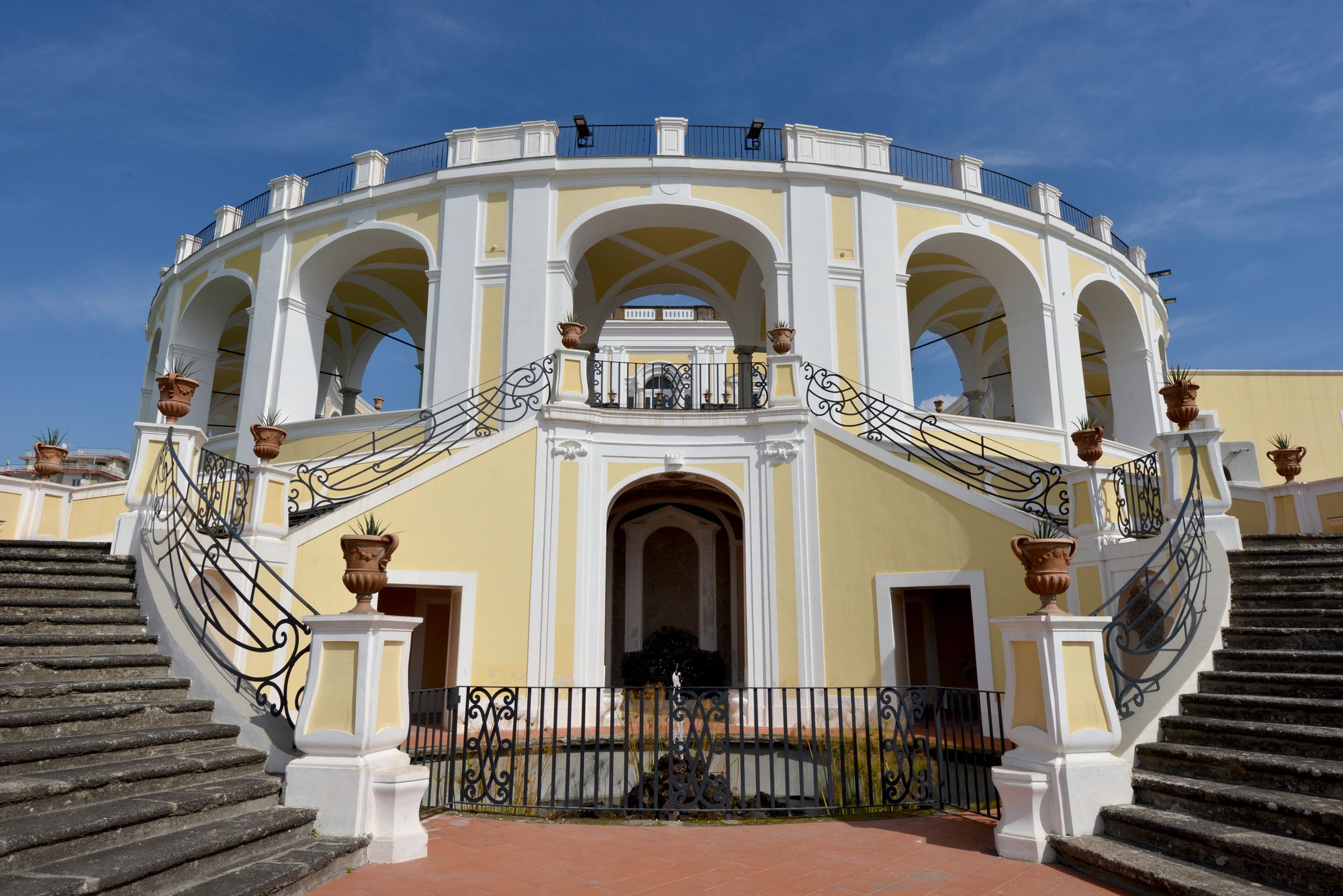 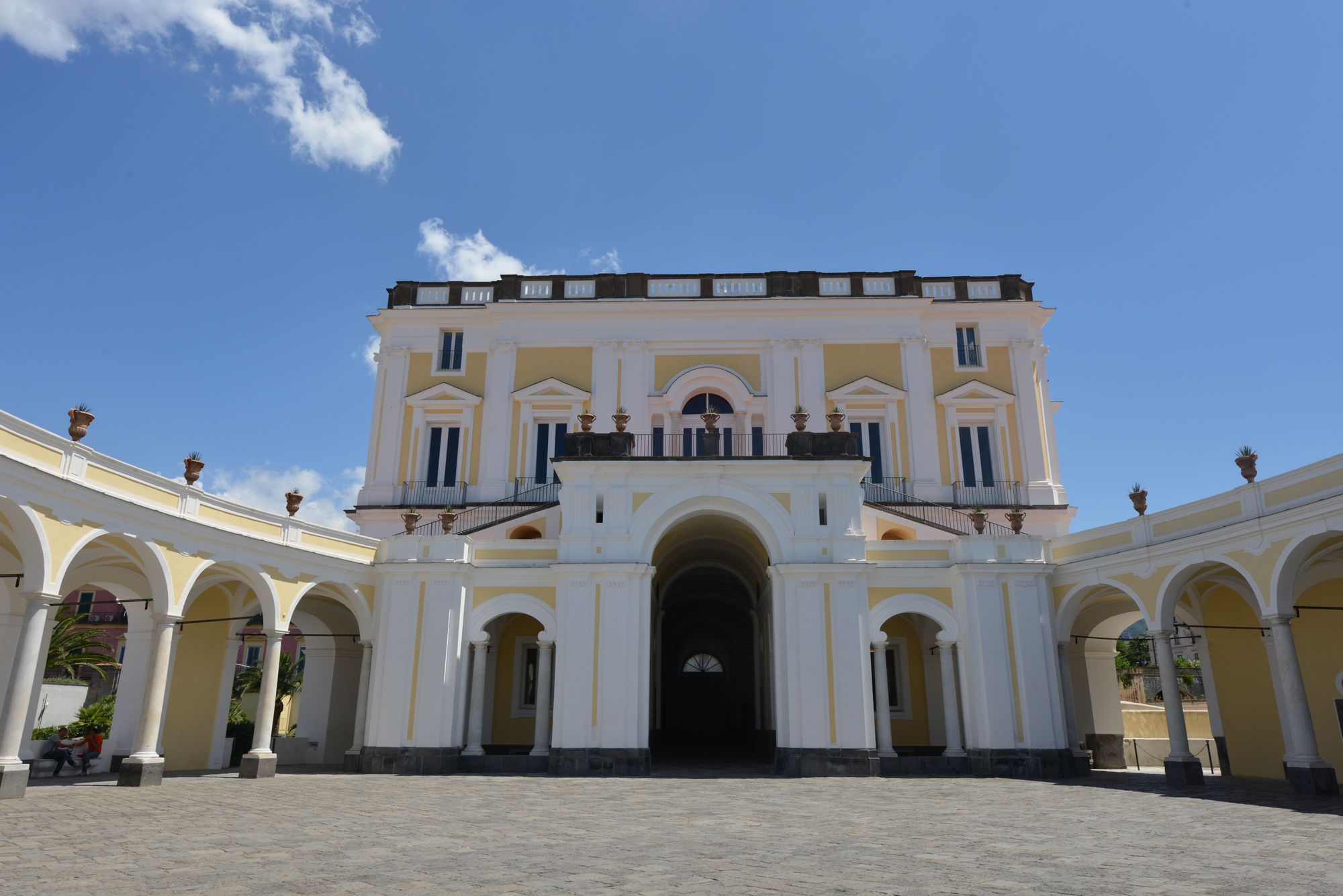 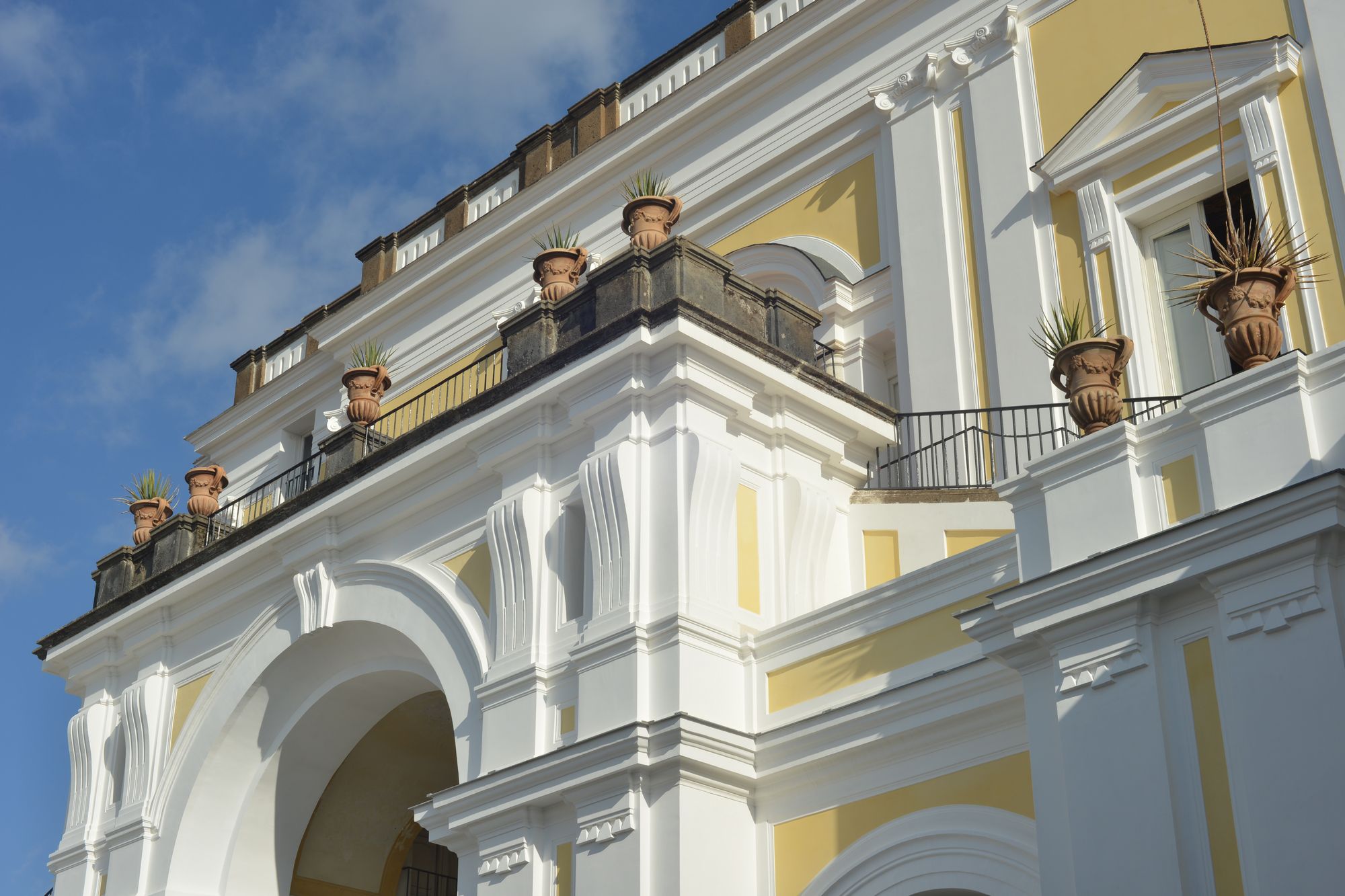 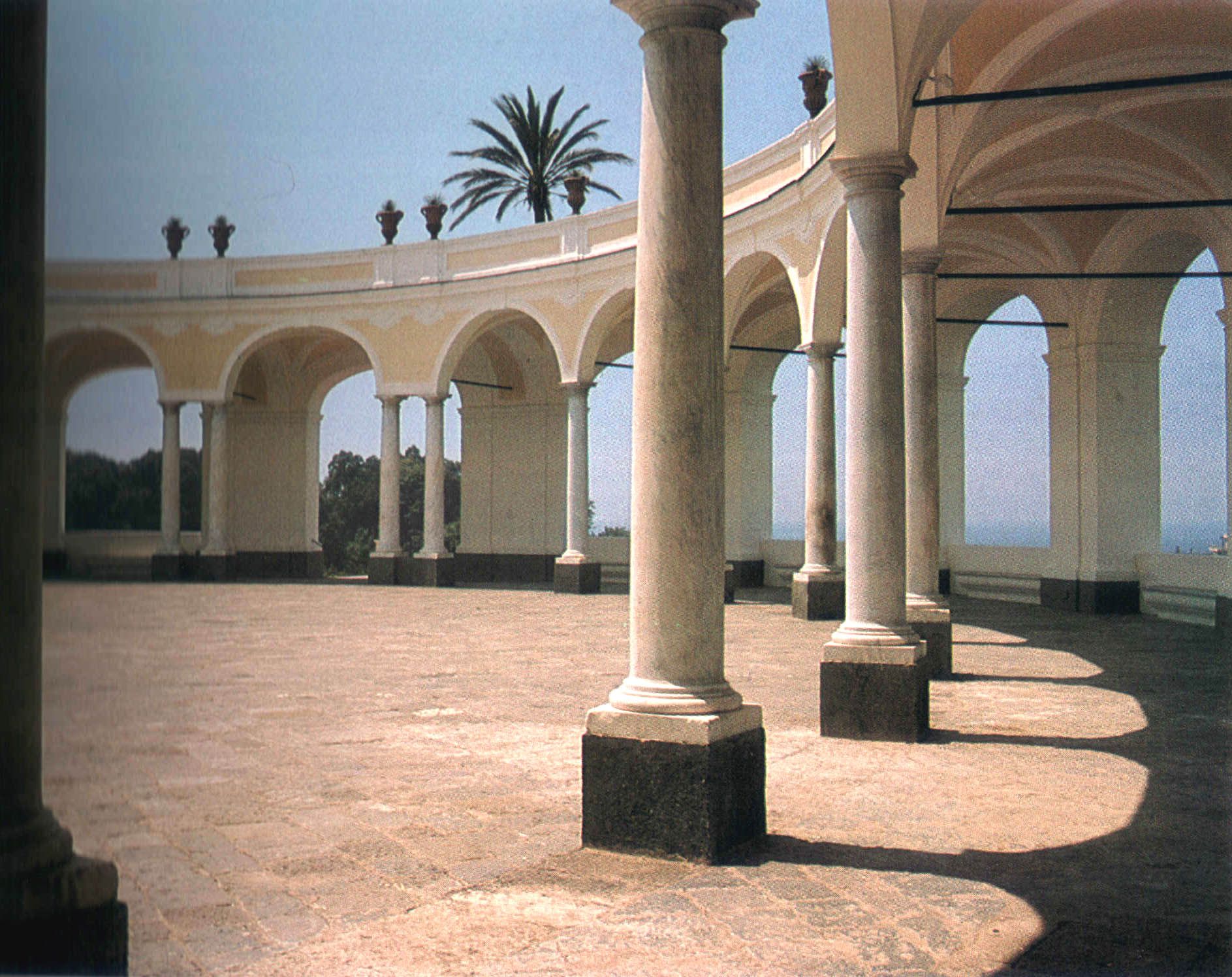 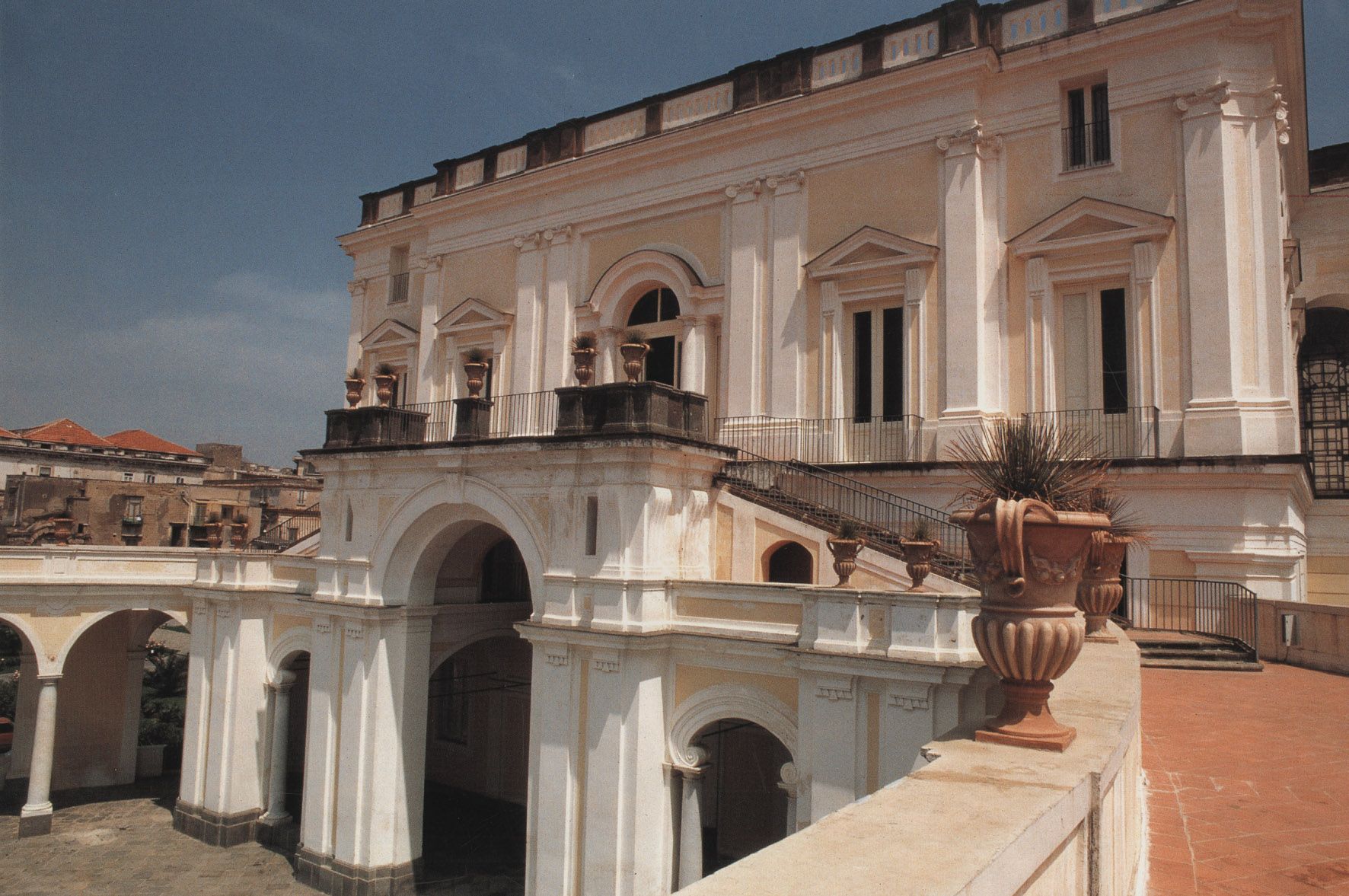 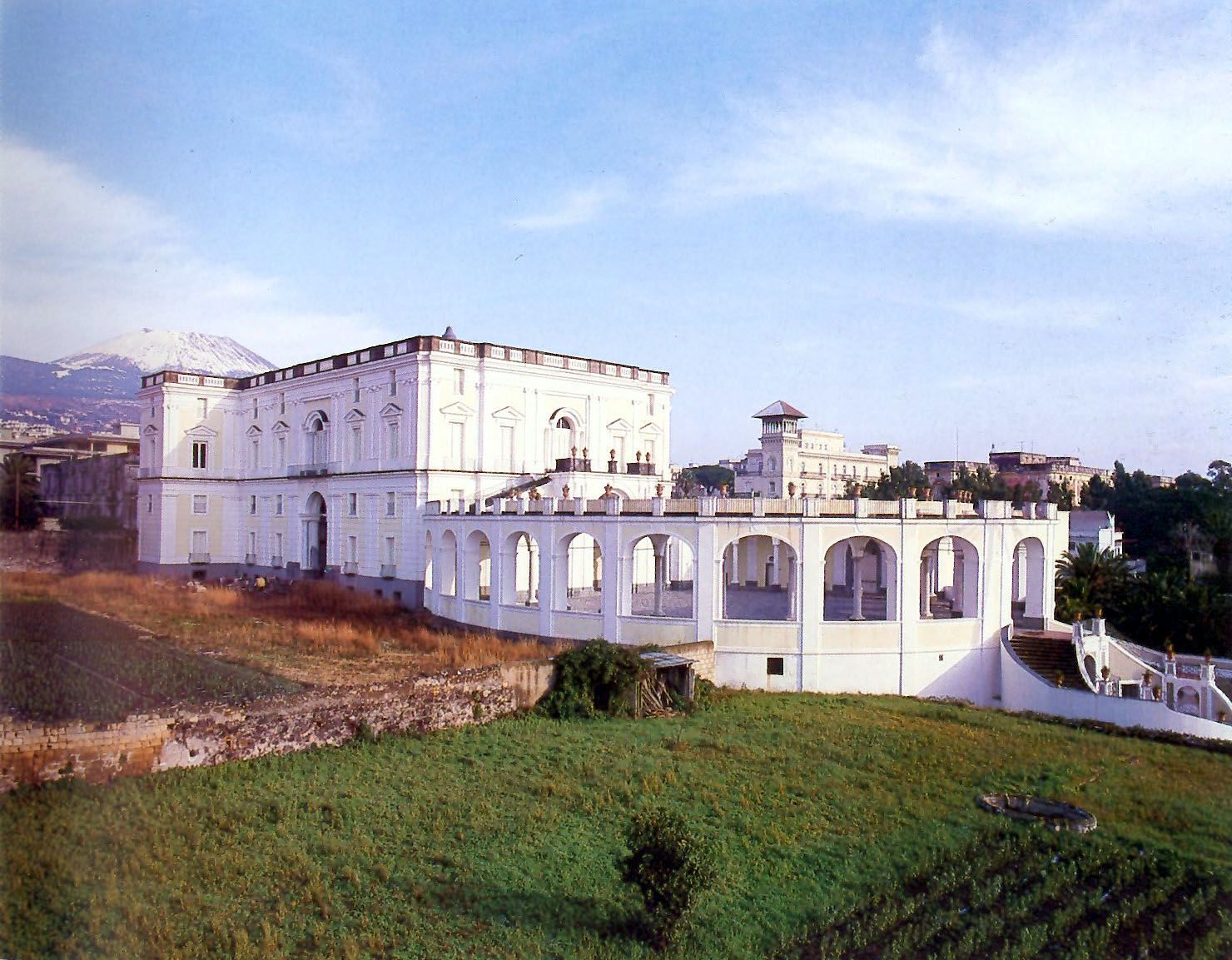 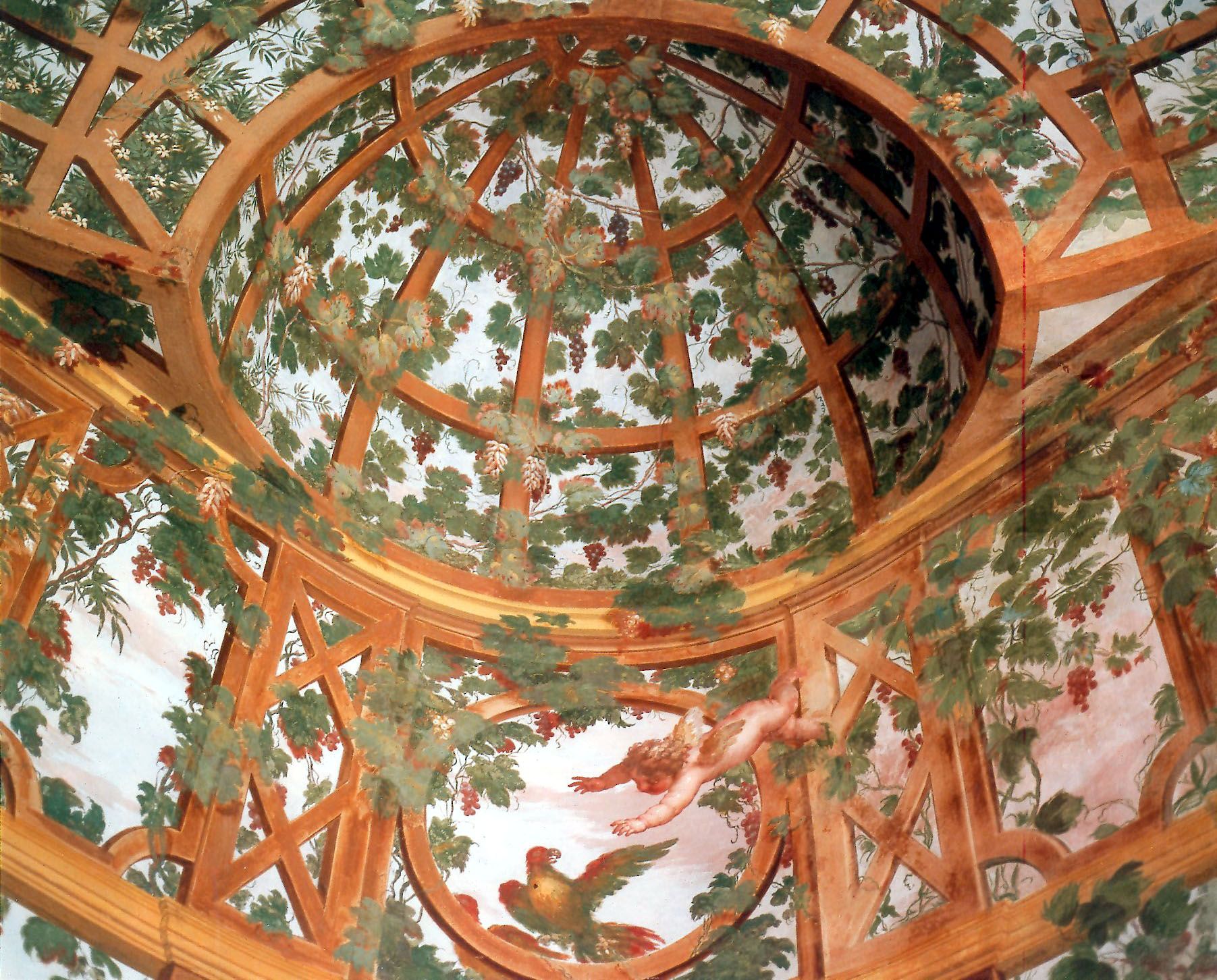 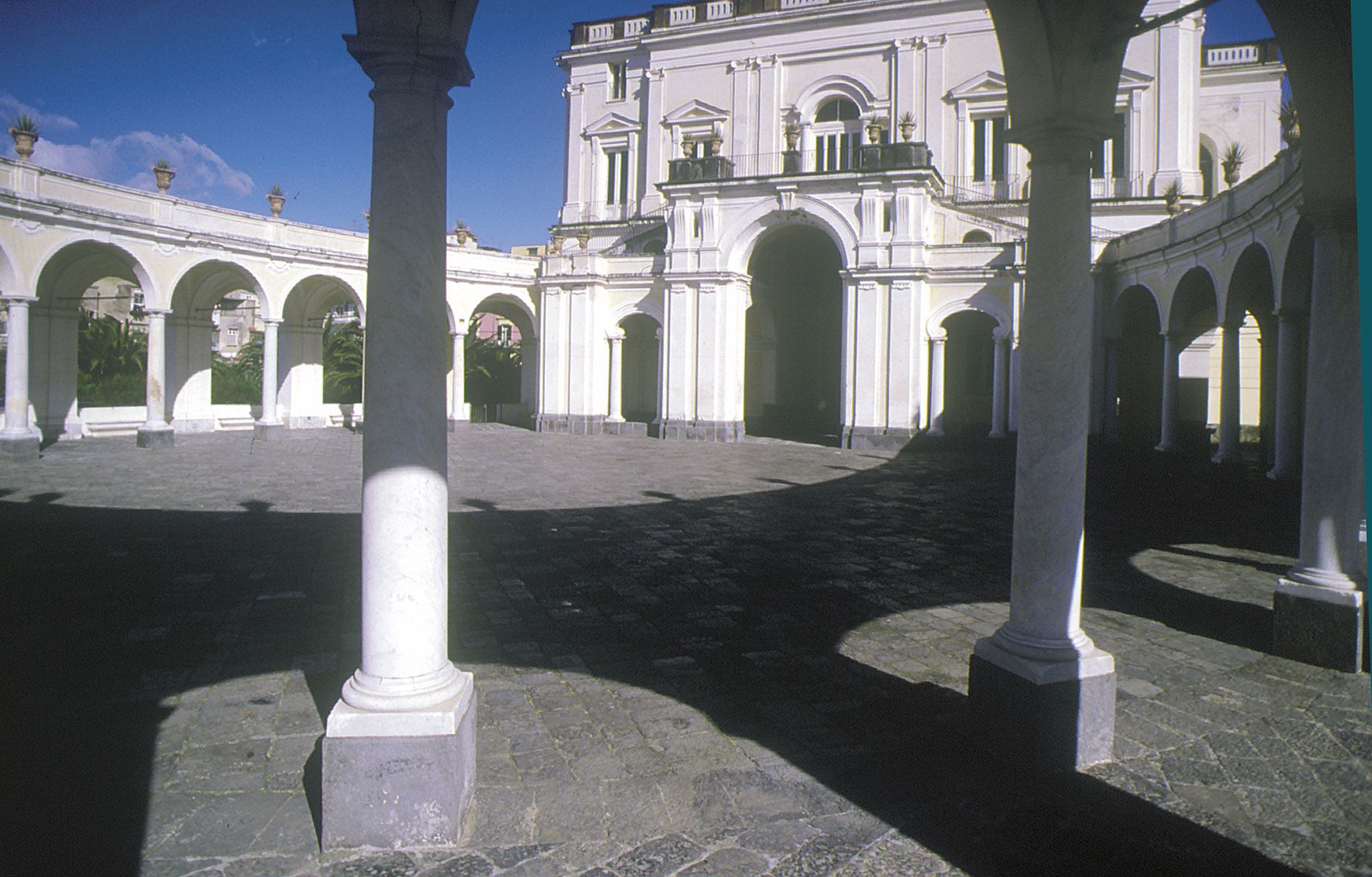