The Garden of delights

The Roman architect started working on the arrangement of the land from 1763, including it in the perspective and artistic project that would last through all 10 years of construction, between second thoughts, requests from the client and innovative solutions. Don Luzio had, however, initially appointed Michele Schemit with the task, who introduced a first division of the sections, which were intended for the realization of a “garden of delights”, agricultural crops, and a labyrinth. Starting from the first months of 1757, Don Luzio regularly paid the architect about two hundred ducats for “the trouble of managing the garden” and for the supply of a wide variety of greenery, including “300 laurel trees, 270 small juniper trees from the Venafro mountain region, three small linden trees, 22 potted cypresses and larger headless cypresses (…) and the plants for the labyrinth”.

Villa Campolieto was full of ornamental fountains with water features and elegant structures between the ornaments of the gardens.

A vital and scenic element, water played such an essential role in the life of the villa, that in order to trace its presence, various surveys were included among the preliminary activities for the site. Fortunately, there is an abundant water table about 20 meters underneath Resina, a detail that favored the creation of several residences along the Golden Mile. In 1758 the local Campolieto workers, who stood out for their skill, were commissioned to manufacture double water pumps to supply water to the various fountains in the park.

The fountain on the southern façade, located at a lower altitude than the building and surrounded by the double symmetrical staircase, was the most important point of interest for those who found themselves walking through “the seaside garden ” during the golden age of the villa. The refinement and preciousness of this fountain, which is still preserved inside the small alcoves below the staircase, is expressed by a succession of three spaces decorated, next to the small seats, with a motive of marine shells, obsidian and fossil straws reproducing ornamental and floral patterns on the walls and vaults. The garden that can be reached through the elliptical arcade was entirely designed by Vanvitelli. Thanks to the experience gained both in Caserta and during his stint as a set designer in Roman theaters, the artist managed to translate his knowledge of perspective into stone. Today, those who walk along the gravel path in the direction of the building will be able to see the harmonious symmetry of the arcade that frames the structure of the villa at the top, while the fountain appears at the front as the perspective hinge of the avenue. It was initially designed to have statues, vases, piperno pillars and benches harmoniously communicating with the rich and refined arrangement of plants, flowers, shrubs and trees; the double staircase, the villa and the volcano to the north, and the view and the garden towards the sea to the south. Diversity and a will to satisfy taste and purpose was expressed by the organization of the external space. In the downstream areas, along the natural slope of the land, intense agricultural use was made of the fertile volcanic soil; vines, orchards, citruses, mulberry trees, vegetables and cereals were produced and in part also sold, generating “good profit”. 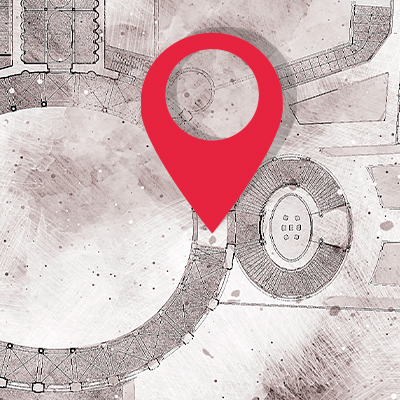