We are at the heart of that stretch of road of the ancient “Via Regia della Torre Octava”, or “Strada Regia delle Calabrie”, that extends from the excavations of Ercolano to the gates of Torre del Greco. It is historically known by the name “Miglio d’oro”, the “Golden Mile”, due to the important concentration of landscapes and archaeological as well as architectural landmarks, a combination of elements that still echoes a glorious past, also represented by the noble residences built after Charles de Bourbon’s decision to build the Royal Palace in Portici in 1738. This route has left passers-by as well as illustrious Grand Tour characters in awe and amazement for over a hundred years, especially for the unprecedented contrast between the threatening volcano and the beauty of the gardens and the residences, expressions of a refined and overwhelming taste that still seduces and attracts visitors.

Villa Campolieto was commissioned by Don Luzio di Sangro, Duke of Casacalenda and prince of Campolieto, who bought a plot of land along the the Strada delle Calabrie, at the “Ponte di Resina” between 1755 and 1757, hiring Mario Gioffredo to design “the noblest casino”.

It took over twenty years to see it finished, since the disputes between the Duke’s wife Marianna di Sangro and the architect regarding the construction of the Neapolitan palace in Piazza San Domenico Maggiore resulted in a legal action against the Neapolitan architect, who also slowed down the Resina construction site until its abandonment in 1761. After parting ways with Gioffredo, construction of the house was managed by Michelangelo Giustiniani for two years, before finally entrusting Luigi Vanvitelli, who was known and appreciated by the Duke, then governor of the Monte di Pietà del San Salvatore.

Defined as one of the most pleasant locations in the area, the entire property still retains a large part of its eighteenth-century conformation, its design inspired by a constant search for balance between landscape and architecture.

Access to the villa is through the historical entrance to the Park. On the right, it is still possible to see the background of the ancient garden, in which the base of a fountain is still visible.

The structure of the garden was particularly complex, as it was designed for different functions. In addition to the fountain, there was a coffee house overlooking the main road, a clock with three quadrants, (to which the toponym “Via Quattro Orologi” that the side street still retains is a reference) and a fish pond that stretched towards the sea and that entailed a series of one-storey small houses, with access on the side street, which were used as warehouses for supplies, and also housed a pastamakers’ shop.

Today this location has been completely upset by the visible alterations that began in the second half of the nineteenth century, with the loss of the Vanvitelli clock and the profile of the tower of the building, on which it is still possible to see the niches on the façade where marble busts used to be. The arrangement of the groves and parterres followed the natural slope of the land, degrading towards the sea, with agricultural land cultivated with different crops (vineyards, citrus groves, orchards). The result was a sense of harmonious and orderly succession of spaces where the areas used for formal occasions and leisure activities were tailored for every need of the family, and always separated from the agricultural areas. 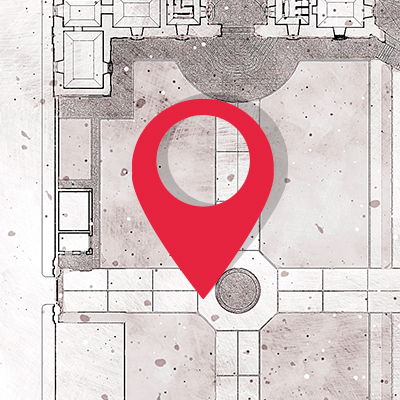